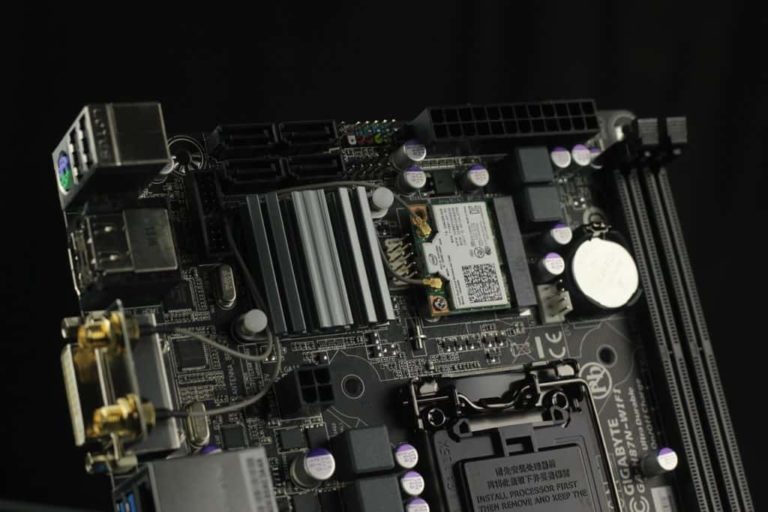 Micro ATX generally use the same chipset as the standard ATX motherboards, enabling compatibility with the same components, but since the size is about 25% smaller they usually have fewer expansion slots.

How do I Know Which Motherboard Form Factor I Need?

This table should help you pick the correct form factor for your motherboard. The smaller form factors (ITX) were made with the design to be compatible with the ATX mounting points. Micro-ATX is capable of fitting even inside the full ATX cases, as the match the ones on the motherboard, but cannot fit inside a Mini-ATX case due to the motherboard being physically larger than the case itself.

Due to size limitations of the smaller motherboards, that means they may have different specifications and expandability of the larger ones. This means that smaller builds will have limited upgradability than the larger builds.

About The Motherboards CPU Sockets

The CPU Socket aka Processor Socket is the socket that houses the CPU. Processors these days are made to go into only one specific CPU socket, which makes the selection of motherboard limited. AMD sockets and Intel sockets are very different in fact, they are different in shape and size.

AMD’s latest socket, the Socket TR4 holds in the threadripper models, and it is AMDs first LGA socket, AMD used to use PGA sockets.

Intel’s most popular socket has to be the LGA 1151 which holds up to Intel’s 9th generation models. Intel sockets are square in shape and Intel sockets have been LGA for decades.

Before picking up a motherboard, you should already have a processor of choice in mind. Check the processors’ specifications, and find out what socket it belongs to. One of the worst feelings is buying something incompatible with your system, it will just slow down the process of you building your PC.

Motherboard Chipsets And Their Features

About The Motherboards Chipset

The Chipset is another thing you need to ensure that it is compatible with your CPU. The Chipset is responsible for how the hardware communicates with each other. Getting the wrong Chipset can mean that the BIOS won’t detect the CPU regardless if the CPU socket supports the CPU. To save time, make sure that your motherboard has the correct chipset for your CPU if not, then you’ll have to modify your BIOS, or purchase the correct motherboard.

This is a list of all the latest Intel chipsets.

This is a list of all the latest AMD chipsets.

You can check on this site for more information about AMD Chipsets.

Which Intel Chipset Is The Best?

When choosing a chipset, you’re basically choosing what features the motherboard has. Certain chipsets make the motherboard more feature rich, and also more expensive. Z390 & Z370 Motherboards are of the highest standard with the most features. They are the top choice for gamers for the fact that overclocking is enabled only if you have (K) Processors.

If you already own a Z370 Motherboard, I wouldn’t upgrade it to the Z390 simply because the upgrade isn’t worth it.

The H370 is a tier down from the Z370 & Z390. If you don’t care about overclocking, and you don’t want to tinker with the settings inside your motherboard, then this is the chipset for you. Perfect for the modest build, no multi GPU support, no overclock support. Please do check out the best budget Z390 Motherboards if you’re interested click here!

Which AMD Chipset Is The Best?

X470 & X370 are similar with slight changes. They both support the AM4 Ryzen Sockets which is also a top choice for gamers. The difference between the two chipsets is that the X470 supports higher memory speeds and it has more USB 3.1 Gen 2 ports. Before making the decision to buy one of these motherboards, it’s worth noting that the X470 is more expensive with negligible benefits, so if you already own an X370, I wouldn’t say X470 is worth the upgrade.

B350 and B450 are motherboards for people who don’t care for multi GPUs but also want to retain some overclockability.

What Is The Motherboards BIOS?

When you start your computer, the BIOS is the first piece of software to run. Since the BIOS is stored on a non-volatile chip, this means all the stored data will not be wiped when turned off. This gives the BIOS the power to configure & connect every piece of hardware on the motherboard to the operating system.

Every motherboard comes pre-installed with its BIOS, so you don’t have to install it upon purchase.

Every BIOS stores and contains all the presets for the hardware, and some of the settings are modifiable.

What Is The Purpose Of The BIOS?

The BIOS has many duties when operating, Its duty is to regulate the data flow between the Operating system and the hardware (CPU, RAM & Hard Disks).

The BIOS also gives the user the ability to overclock depending if it’s enabled on that specific motherboard.

You will first need to know how to access the BIOS before you attempt to do any overclocking to your hardware.

To access the BIOS, upon the boot process there will be a timeframe where you have to press a specific key, for most computers it is F10.

Can A Motherboards BIOS Be Updated?

You can find the downloadable firmware from the manufacturer website of your motherboard. The fear when updating a BIOS shouldn’t exist anymore! Even if something were to go wrong, most motherboards have a dual BIOS in case a failure were to occur. Please do update your BIOS whenever an update is available.

There is a free utility to check the version of BIOS you’re using, Please Check Out CPUZ.

What are Motherboard DIMM Slots?

DIMM (Dual In-line Memory Module) AKA Memory slots that are arranged in groups of 2,3 or 4. Their functionality is to support and the RAM you install to the motherboard.

Before purchasing a motherboard, I recommend that you have in mind how much RAM you want beforehand so that when you buy a motherboard, you won’t have compatibility issue due to the board not supporting enough RAM.

If you wish to have as much headroom as possible I recommend definitely picking up an ATX board since they have more slots for extra RAM than the smaller mainboards.

What Does A Motherboard Have To Be Compatible With?

Make sure the CPU socket, and the chipset is compatible with the processor.

RAM and the motherboard needs to be compatible, not only in size, but the speed of it. The average motherboard can max out at 64 GB of RAM which means you will have to purchase a unique motherboard to exceed that limit.

The speed of the ram (Current generation is DDR4) is the most popular memory speed in this current generation. The data transfer rate of DDR4 ranges between 1600Mhz and 3200Mhz.

Any other RAM module that isn’t DDR4 can’t fit inside a DDR4 socket, the notch has been moved to prevent oneself from inserting the incorrect RAM module.

The RAM and CPU have a very close relationship, they spend most of their time communication with each other, and they can only communicate with each if they’re compatible. Using the i7 8700K as an example, this processor can only support DDR4 Memory and nothing else.

The motherboard has to be compatible with the case, check the specifications of the case to see what form factors are suitable.

If you’re looking to build a PC with more than one GPU, the motherboard needs to support dual graphics cards (SLI/Crossfire).

You need 2 PCIe x16 slots running at least x8 for standard performance. It can’t be any slower than x8 for NVIDIAs side since NVIDIA cards don’t support x4 PCIe slots.

Take into consideration, if one of your slots is slower than the other, the fastest PCIe slot will automatically run at the slowest speed.

The PCIe slots should both be operating at x16 for the best performance.

Does Motherboards Come With Wifi?

If you want an ATX motherboard with native wifi, then you will have a hard time finding one as they are rarely implemented in the large form factors. Native wifi is common among the small form factors such as mini-ITX, this is because of a lack of upgradability. The larger form factors come with enough expansion slots to implement wifi capabilities.

What Does A Motherboard Do For Gaming?

If I were you, I wouldn’t be too fussed on the motherboard affecting gameplay, but if you want to squeeze extra performance out of your CPU do consider purchasing an unlocked motherboard.

The motherboard only affects performance if you’re overclocking. Anything else does not have any noticeable effect on performance. When talking about raw performance, you’re going to need an overclockable motherboard and some knowledge on modifying data in the BIOS.

Perhaps if you’re sporting SLI or Crossfire, you definitely want the PCIe slots to be running at x16 bus speed. If it were to run any slower, it may bottleneck the performance the dual GPUs can offer.

If you’re interested in the Best Intel & AMD Motherboards, you can find them here!

Check out this article, it goes into depth about the relationship between motherboard and gaming performance!