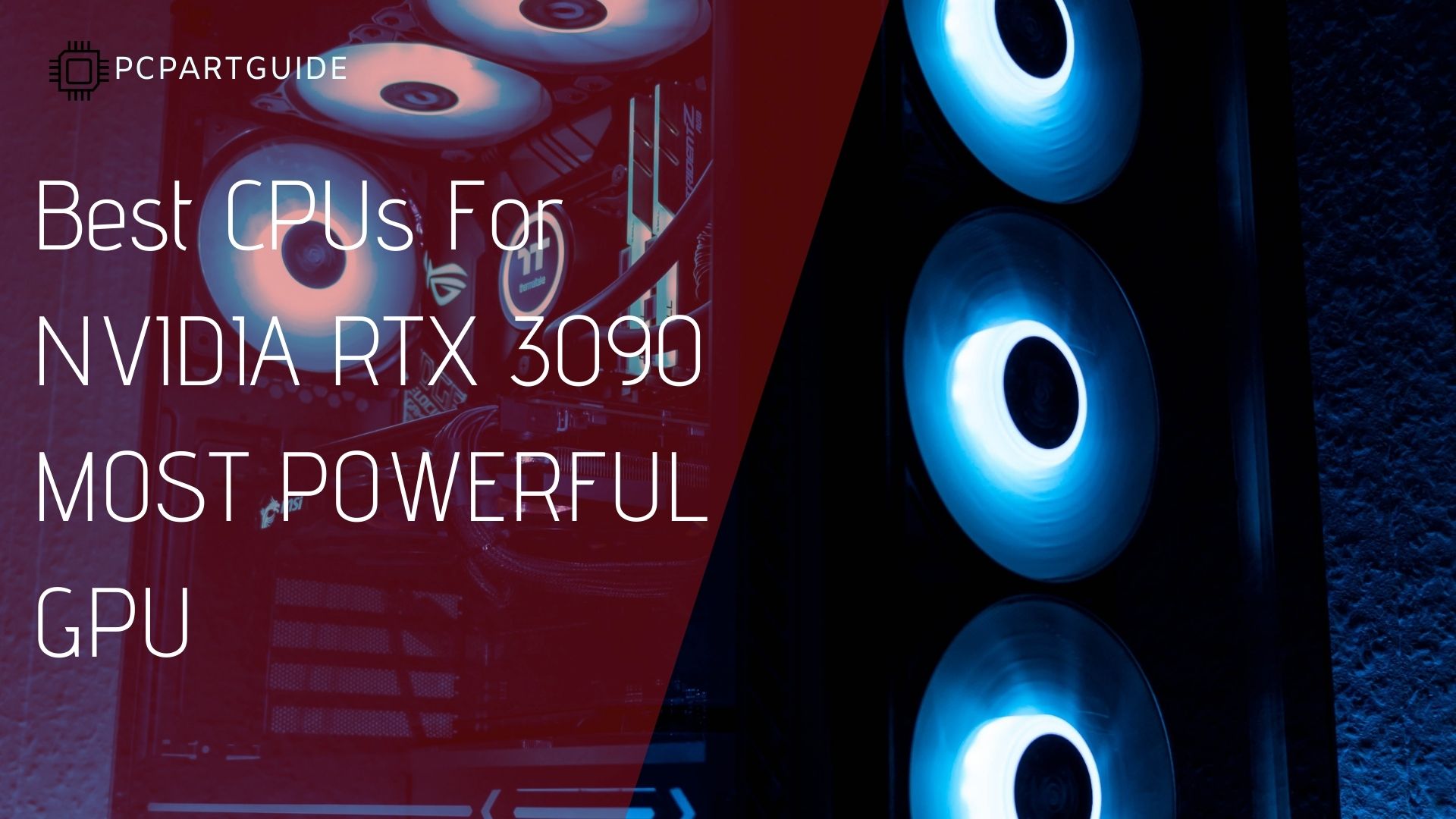 With sales that started a little over a week ago, the RTX 3090 had a slightly disappointing launch, similar to the RTX 3080. Regardless of that, some people managed to get their hands on the most powerful GPU Nvidia ever built, and they probably need a decent machine to put it in. If you are in that situation, then this article is for you.

As of right now, the RTX 3090 is the most powerful graphics card available, but this performance will come at a TITAN level price. This graphics card will crush nearly every single game at 4K; you’ll be able to achieve 60FPS+ on most games, this is all you need for a smooth gaming experience.

In today’s article, we’ll outline five of the best CPUs that you should pair with your shiny new RTX 3090. The list applies to users that are looking to upgrade their existing hardware or plan to build a new one. Note that the CPUs are outlined in no specific order. Before we begin, we’ll need to explain why a high-end GPU should not be paired with a cheap CPU.

Considering how powerful today’s hardware is and how advanced games have become, putting a high-end graphics card in an entry-level or mid-range machine is not a wise choice. This is especially true with the RTX 3090. Modern games depend on CPU performance as much as they do on GPU performance, so if you pair Nvidia’s flagship GPU with some cheap CPU, you will start to see some bottlenecking.

Gaming enthusiasts are probably going to be the main market for this graphics card, if you’re looking for a great gaming experience for a decent price, then the RTX 3070 & 3080 is perfectly fine. However, if you need as much performance as possible, maybe you need a great card for Machine learning, then picking up the RTX 3090 makes perfect sense.

Unlike the olden days where games mostly depended on raw GPU power, modern titles work slightly differently. A decade ago, frame rates over 60 were unimaginable, unlike today, where we manage to get well over 200 with ease.

All of those frames will need to go through it, and unless it can handle them, the experience will be terrible – the CPU will struggle, while the GPU will be chilling. With 4K gaming, the GPU will work much harder with all of those pixels, and the frame rates will be lower, in which case the CPU can relax a bit.

To ensure that your machine is prepared for both scenarios, your high-end GPU like the RTX 3090 should definitely be paired with a high-end CPU. To help you in your search, we compiled a list of the five CPUs that we believe should be paired with Nvidia’s flagship GPU.

A flagship GPU deserves to be paired with a flagship CPU, and if you’re a fan of Intel, then that should be the Intel I9 10900K. Considered the king of CPUs for gamers, this is an excellent combination for the RTX 3090. Intel is criticized for still producing CPUs with the 14 nm technology, while their competitors are already below the 10 nm mark. Regardless of that, the 10900K is a beast of a CPU worthy of working with the RTX 3090 side by side.

Equipped with ten cores with support for multithreading with twenty threads, it’s clear why this is probably the most powerful CPU Intel has made. The base clock of 3.7 GHz can go up to 4.9 GHz for an all-core boost, while the single-core boost goes up to 5.3 GHz, and the entire package is backed with 20 MB of cache. The specs on paper seem impressive, and in real-life scenarios, it manages to get ahead of last year’s I9 flagship.

Putting both CPUs side by side and running a few benchmarks, we start to see the difference. The single-thread performance remains more or less unchanged, which is not surprising, but in multi-threaded tasks, we see a significant bump in numbers. In other words, the 10900K is a better I9 CPU, and one of the best you can pair with the RTX 3090.

In addition to that, you have the option for some extra power. Intel’s K CPU lineup are the ones with the unlocked multiplier, resulting in an overclocking option where you can increase the power even more. Keep in mind that you’ll need some beefy cooling solution for that.

Since we already mentioned the 9900K in the previous section, we decided that we should also recommend it as an excellent candidate to pair it with the RTX 3090. Getting the latest gen CPU is recommended, but it doesn’t mean that it’s the best course of action. In most cases, when a new generation of CPUs comes to the market, the older ones’ price goes down, which is the case with the 9900K. When the 10th gen Intel CPUs went to the market, the previous 9th gen started to drop in price, and this is your chance to score.

As we mentioned, the 9900K is not on par with its successor, but that doesn’t make it a bad choice. Compared to this year’s model, the 9900K has two fewer cores, and for an eight-core sixteen thread CPU with 16 MB cache, it can throw a punch; after all, both generations are built on 14 nm technology. With a base clock of 3.6 GHz, this CPU can boost up to 5.0 GHz on a single core or 4.7 GHz on all of them. Regarding performance, the single-core benchmarks are very similar to the newer model, while the multi-threaded results show there it falls slightly behind. The good news is that it manages to go head to head with some of the I7 models from the newer generation.

Similar to its younger brother, this is a K model, so the option to overclock it is on the table. The boost in frequency means that with the right cooling system, it will match or even pass the performance of the newer model. That is what makes it an excellent choice if you want to pair it with your RTX 3090.

A flagship GPU should be paired with the flagship CPU, but what if you can save a few bucks on the CPU? This is where the Intel I7 10700K comes into play. On paper, this model may not sound like much, but it will surprise you. Developed using Intel’s 14 nm technology, this I7 model has eight cores and sixteen threads with a number pretty similar to last gen’s I9 models. The fact that its’ not the latest and greatest CPU from Intel doesn’t mean that it’s a terrible choice to pair it with the RTX 3090.

All eight cores will run at 3.8 GHz base clock and will boost at 4.7 GHz, while the single-core boost can reach up to 5.0 GHz. If you take into consideration that it has 16 MB of smart cache, you will see why we and most people compare it to I9 models from the previous generation.

The benchmark results paint a similar picture. Single-threaded performance falls a bit behind models like I9 9900K, but in the multi-threaded section, we see some slight increases.

We already mentioned that the I9 9900K is an excellent CPU that you can pair with your RTX 3090, and considering how similar the performance is, the same can be said for the I7 10700K. If you go for this, you won’t be sacrificing performance, but you will be getting a CPU from a newer generation.

Even though it’s an I7 CPU, it’s still a K model, so you get an unlocked multiplier out of the box. Just stick it in a motherboard that allows that put a good cooler, and you’ll be able to overclock it for some additional performance.

Fans of team read should not despair; we have a few Ryzen models we’d like to recommend as a good combination with the new RTX 3090. For the past several years, AMD has turned the tides around and has developed some extraordinary CPUs that, in most cases, manage to surpass its Intel rivals. One of the models we’ll recommend pairing with the RTX 3090 is AMD’s Ryzen 9 3950X. Even though the Threadripper models are more powerful, they are also more expensive, and for this case, you may not need to pay that much.

When you look at the frequencies, you may think that the 3950X is nothing special. The base clock is 3.5 GHz, and the single-core boost is 4.7 GHz, while the all-core goes up to only 4.1 GHz. The numbers may not sound impressive, but if you take into consideration that the CPU has sixteen cores and thirty-two threads with 73 MB combined cache, you may notice something – it has double the core count and triple the cache size of its Intel competitors.

Putting them head to head also reveals how powerful these CPUs are. The single-core performance is more or less the same with most high-end models on team blue and team red, but in the multi-threaded department, the 3950X is killing the competition. In some comparisons, we noticed that this model manages to surpass some of the lower-end Threadripper models. If that doesn’t convince you that it’s a good pair with the RTX 3090, nothing will.

AMD has been selling unlocked CPUs for quite a while, and almost all of them can be overclocked. Even though you may not need to, considering the performance, having that option on the table is a nice thing to have.

Going overboard with the CPU is easy, but in most cases, you won’t need to. Even though pairing your RTX 3090 with the most powerful CPU you can get your hands on is ideal, it’s not always necessary. Ryzen 9 models have been dominant on the market ever since they came out, and even though the 3950X is an absolute beast, the 3900X is no slouch either. It may not have as much, but it is still an excellent CPU choice to be paired with the new RTX 3090.

The frequencies are more or less the same as with the previous Ryzen we mentioned. The base clock is slightly higher at 3.8 GHz, while the all-core boost remains the same at 4.1 GHz, and only one core will be able to boost up to 4.6 GHz. So, if that’s the case, why is the 3900X not as powerful as the 3950X? Unlike AMD’s highest-end Ryzen model, the 3900X has only twelve cores and twenty-four threads combined with 72 MB combined L2 and L3 cache. Those are not bad specs at all, and the performance tests prove that.

Single-threaded performance is fairly identical across the board for most Ryzen 9 CPUs, while the multi-threaded benchmarks put the 3900X on par with some of the best. It doesn’t manage to beat the 3950X, but considering how close it gets with the fewer cores and threads, it is a CPU we can gladly recommend that should go on the same motherboard as your RTX 3090.

AMD CPUs are famous for being powerful, but they’re also renowned for their overclocking capabilities. The 3900X is overclockable out of the box, and if you tune things right and keep the temps under control, you may manage to get better performance than the stock 3950X.

Making the right CPU choice can make or break your gaming experience. In some cases, people pair high-end graphics will lower-end CPUs, at which point the GPU will not be able to stretch its legs and show what it can do. This is extremely crucial with the RTX 3090.

Nvidia’s most powerful GPU came out recently, and not many people managed to get it. the ones that did are currently thinking about which CPU to pair it with. Our list of the five best CPUs you should get to pair your RTX 3090 with will help you in your decision.