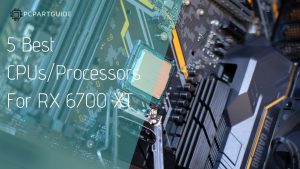 The Radeon RX 6700 XT is part of AMD’s 6000 series as direct competition for NVidia’s 300 series GPUs. Featuring the RDNA 2 architecture, the RX 6700 XT is also capable of ray-tracing thanks to its 40 ray tracing acceleration cores. The 12GB GDDR6 VRAM ensures that the GPU can handle nearly every AAA title at 4K resolution which is its aim.

However, the best of the 6700 XT lies in its clocking limit. With a theoretical upper limit of 2.95 GHz, compared to 2.8 from the 6800, it is ideal for overclocking. Even with only the fans cooling it, the 6700 XT still clocks in at 2.65GHz which is very impressive by itself.

The GPU is easily a powerhouse and with AMD’s history, is surely going to be a staple for mid-range gaming setups. Its performance easily rivals NVidia’s 3060 Ti and the 3070 with its only drawback being the absence of a DLSS alternative. This causes frame rate loss when ray tracing is enabled.

Coming towards its CPU pairings you’re surely going to want something that does not bottleneck the 6700 XT. Something that can be the yin to its yang. Here we have some options and their comparisons.

If you’re looking for the biggest bang for your buck then this is the CPU for you. MSRP Priced at 299$ this 6-core, 12-thread CPU matches performances with the i7 10700 for 75$ less. Focused on gaming, this CPU is perfect for the RX 6700 XT as it also boasts amazing overclocking potential.

It even comes with its inbuilt cooler, the Wraith Stealth. Its base clock at 3.7 GHz is nothing to scoff at and if you really want to push it, you can use aftermarket coolers to overclock it to upwards of 4.6 GHz. The Zen architecture really makes it stand out as it rarely heats up under normal conditions and you’ll barely hit 75 degrees Celsius even with the most demanding games.

The Ryzen 5 5600x is thus the best option for a budget gaming setup but will fall short if you’re going to use it for more serious work like 3d rendering or video encoding. It needs less power, its thermal design power being 65W, heats up less and will give you everything you need for gaming.

It outperforms Intel’s similarly priced cores like the i5 10600 and it even comes with its own cooler. The chip is also unlocked and with the right cooling method can pass 4.7 GHz. All-in-all a strong cool CPU that can satisfy all your gaming needs.

The 5800x MSRP is at 449$ and when solely comparing its gaming performance to its Intel rival, the i7 10700 it barely outperforms it. However, the 5800x is at its best when handling workloads like 3d rendering and video encoding. Aimed at a more serious audience, this chip can give you everything you need for gaming and work.

Its base clock speed is 3.8 GHz and with turbo, it can hit up to 4.7 GHz. With 8-cores and 16 threads this chip can take anything you throw at it. It doesn’t come with its own inbuilt cooler so that’s not a plus.

AMD’s Zen 3 architecture has shifted its status from the underdog to direct rival to NVidia. Where previously their chips were preferred only by the more serious audience, the likes of the 5800x have made them direct competitors in both niches. The 5800x is proof enough with it outperforming Intel’s comparable chips in both departments.

For gaming, the Ryzen 5800x is actually pretty good in terms of single-core performance even beating the I7 10700K, so overall, we’ll say the Ryzen 7 5800x is the better processor.

In conclusion, if you’re aiming for a setup that can handle both gaming and workloads, the 5800x is where your salvation lies. Admittedly, a tad bit pricey, it still offers the best of both worlds.

AMD’s Magnum opus, with which they finally grow out of Intel’s shadow and instead dwarf them. For most consumers, this chip is easily huge amounts of overkill, with its 12 cores and 24 threads there is literally nothing that this chip cannot handle. Intel’s superiority over AMD lies in its ability to be better suited for gaming but against the 5900x they fall short. It outperforms in games, and when handling extensive workloads. It just is way better.

It’s MSRP is at 549$ and like mentioned before is serious overkill for the average user. It is aimed only towards the greatest enthusiasts. Its base clock is at 3.7 GHz and with turbo it is capable of 4.8 GHz. There’s 64 MB of L3 cache compared to 32MB for the previous two cores mentioned. For gaming though, its 12 cores are overkill as most games max out at 8 cores, 16 threads. The chip is an absolute heavyweight when it comes to performance as it eclipses Intel’s i9 10900. The chip can be overclocked but with this performance, why bother?

The Ryzen 9 5900x is a multi-purpose processor which competes with the I9 10900K, and you may assume the Rzyen 9 5900x isn’t as good as the 10900K in terms of gaming, this isn’t the case. The Ryzen 9 5900x has massively improved its IPC (Instructions per cycle) which makes it a single core beast. On top of that, the Ryzen 9 5900x comes with two extra cores compared to the 10900K, so single-core performance is definitely superior.

The conclusion? This core is built to last, even 5 years from now its performance will be high tier. It is expensive, yes, but if you’re looking to make an absolute number-cruncher of a machine this is the core you want. It will do anything, from maxed out 4K gaming to intensive tasks like 3d rendering, this masterpiece will not leave you wanting for anything. It doesn’t come with its own thermal cooler so you’re going to want one if you want to eke out all that juicy performance without fear of thermal damage.

Intel’s answer to AMD’s Ryzen 3950x, this chip is another of Intel’s aging 14nm architecture. It depends on brute and excess power, and Intel has made sure to squeeze out every last bit of performance to market this chip as ‘The fastest gaming processor’.

It boasts a base clock of 3.7 GHz peak turbo (single-core) of 5.3GHz and 4.9GHz for all cores. It comes with 10 cores and 20 threads but its real strength is in its power consumption. It has a TDP of 125W which can shoot up to 250W with overclocking. So much for sustainable power consumption. It’s a good chip based on an outdated architecture which Intel refused to upgrade from when it controlled the market. Now with AMD giving them competition, Intel brute-forced this chip into a number-cruncher.

The thing is though once you’re gaming above 1080P CPUs doesn’t really matter much. Of course, you don’t want a 10-year-old chip to go with a 6700XT but at the 10900’s pricing, there are better alternatives. This chip is only for those who absolutely want the biggest numbers regardless of pricing.

The 10900K is outshined by the 5900x in nearly every regard except for a couple of frames in some games. Not really a comparison, with Intel’s old architecture and absurd power consumption against an innovative 7nm Zen 3 which consumes way less power.

Get this chip if you like the tag of ‘world’s fastest gaming chip’ but know that at 4K gaming any other CPU on this list would give the same performance. The chip is also outperformed when it comes to workloads.

The more viable of the Intel cores on this list, the i7 10700K boasts a base clock frequency of 3.8 GHz and max turbo of 5.1 GHz. Its 8 cores, 16 threads can handle any AAA game at the highest settings. MSRP Priced at around 380$ it’s best suited for a high-end gaming setup perfectly complimenting the RX 6700XT. The power consumption is on the higher side but that is to be expected from Intel’s older architecture, at TDP 125W. It gives nearly the same performance as the i9 10900K for a much lesser price tag.

The processor also gives you plenty of headroom for overclocking and coupled with any decent aftermarket cooler performance improvements can be substantial. It also leads in gaming against competitively priced AMD CPUs but somewhat falters when it comes to handling workloads. It doesn’t come with its dedicated cooler so buying one to ease out its thermal suffering is recommended.

The CPU sits in a well-balanced niche with high performance and very competitive pricing making it a great pairing option for the RX 6700XT. If you’re focusing on a setup dedicated purely to gaming this core can satisfy all your needs without being over the top.

The I7 10700K is a great processor for just gaming and performing small multicore tasks on the side, this is because the I7 10700K has great single-core performance, and it comes with 8 cores 16 threads.

We recommend the I7 10700K over the I7 9700K for the fact that the I7 allows for hyperthreading whereas the previous version (I7 9700K) does not. This can make a massive difference when video editing as more processing cores/threads can help a lot with performance.

For most users I’d recommend either the I7 10700K or a Ryzen 5 5600x. Both are outstanding cores capable of delivering high performance without being too harsh on your bank account. The Ryzen 7 5800x is also a nice alternative for those who need to balance work and gaming.

The Ryzen 9 5900x on the other hand is just too much for most of us and unless you’re aiming for 8k gaming with multiple GPUs or some high-end rendering, it’s just plain overkill.

The i9 10900K although a good processor is more of an expensive novelty. I’d not recommend it unless you really care about those few extra frames per seconds.