One of the biggest mistakes we see with PC builders is the RAM. Inexperienced people often overlook the importance of those little sticks and usually go for the cheapest option. While even they will get the job done, it’s not always the best approach.

Before you make a purchase, figuring out how much ram your system needs can be helpful in case you actually require more for the tasks you run.

If you already decided on the 10900K, you will use a motherboard with excellent features. Putting some cheap RAM sticks on a machine like that is a bad idea. While you will get the most out of your CPU and RAM, you will be sacrificing some performance due to the lack of power the cheap RAM has.

If you’re team Ryzen, then we’ve reviewed what ram sticks is best for the 5900x. The 5900x is a top tier processor for gaming and multi-core processing. A more affordable, but still powerful CPU would be the Ryzen 7 5800x. Find out what ram kits are best for the 5800x if you’re interested.

If you’re only interested in gaming, and trying to keep your budget low, then check out what the best kits for the 5600x are.

Reading this may have gotten you thinking about which RAM kit is a good option. Don’t worry, just keep reading. We compiled a list of the best RAM kits for the 10900K for your convenience. 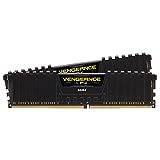 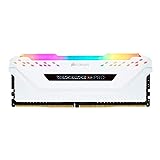 Corsair offers this kit in a variety of packages. You can either get it as dual stick option 2×8 or as a single 16 GB piece. If you are building your PC, I would recommend going for the two-stick option, as that way, you will be utilizing dual-channel.

Visually, you can get the Vengeance RGB Pro in two varieties, black and white. Both of them have RGB on the top with dynamic lighting in multiple zones. The control over the lighting is via Corsair’s iCUE software. If you use other RGB controlling software, you’ll be pleased to know that the Vengeance RGB Pro also works with the tools from MSI, Gigabyte, and Asus.

Corsair makes some promises on the performance side of things, but things are not all sunshine and rainbows. First, since this model is XMP 2.0 compatible, you can make some overclocks.  The base clocks or SPD is rated at 2667 MHz at a voltage of 1.2 V with pretty tight latency. They claim that the Vengeance RGB Pro can go as much as 4600, but since you went with the 10900K, the max is 4000 MHz. The numbers are not all that bad, but the problem is that we weren’t able to reach them during testing.

Despite that, these are not terrible choices. The specially designed PCB ensures that you get the best performance possible, while the aluminum heat spreader ensures that the sticks remain cool even when pushed hard.

if you’re not a big fan of RGB or that’s not your build theme, then the Vengeance LPX series is an excellent option. In many ways, when you look at the LPX series, they are very closely matched with the RGB Pro but without the RGB.

Similar to the previous one, there are multiple kits to choose from, and for the 16 GB variant, we are recommending dual-channel. This is if the motherboard supports it and you have two available slots. If not, the single stick will do just fine.

Unlike the previous model, the LPX comes in 4 colors – black, white, red, and cool gray. Since there is no RGB on this model, you’ll have to work with the options at hand.

For performance, you have a variety of options. You can get the kit with frequency as little as 2133 MHZ with C13 latency and go as high as 5000MHz with C19 latency. Since the 10900K can work with a frequency as high as 4000 MHz, going any higher than that would be pointless. With that said, when the RAM gets pushed at 1.35 V, it suffers from limitations. In other words, to keep things stable, don’t push it too far.

Our opinion remains the same as with the RGB Pro; this is an excellent kit for your 10900K. It has excellent performance for the price, and even though it won’t break any overclocking records, it will keep itself cool. This is thanks to a heat spreader made of aluminum mounted on the PCB, which will help dissipate heat better.

The name says it all, this is the elite lineup from the Ballistix models. Even though the Crucial Ballistix Elite is an excellent RAM kit to pair with your 10900K, there are several things you should know before you go out and buy one.

The first issue is the flexibility or the lack thereof. The 32 GB kit only comes in a 4 stick configuration, so if you have a motherboard with 2 slots, you should look elsewhere. As for frequency, you can either get it in 3600 MHz or 4000 MHz variants. The 10900K works with a 4000 MHz ram, but we found that the 3600 MHz is the sweet spot during most benchmarks. You will get slightly better performance than some of the competitors, but it may not be the best option if you factor in the kit’s price. If you decide to go more, the advantage will start to drop slightly, just as the instability may arise.

Running your RAM at higher speeds means that there has to be something that will cool it. Crucial have designed an anodized heat spreader with some military style. It not only keeps the temps under control, but it also looks good in black.

As for design, they are similarly sleek with a minimal design that should perfectly match a black motherboard. Unlike the LPX, you don’t have any color options for the heat spreader, leaving you only with the black stick.

Overall, we don’t say that the Ballistix Elite is a bad kit for your 10900K, but it’s not perfect. We could justify the higher price tag for the heat spreader and the fact that they hand-pick the sticks. Still, the lack of flexibility and average overclocking capabilities was disappointing.

The G.Skill Trident Z RGB is in many ways considered a direct competitor to the Corsair Vengeance RGB Pro 16 GB we mentioned in the beginning. Despite the advantage of twice the capacity, we weren’t able to find too many differences between them.

As the Trident Z RGB is a 32 GB kit, the first advantage it has is that you can choose between dual channel and quad channel. On top of that, the speed options are more extensive and you can go as little as 2400 MHz up to 4000 MHz. There are options for more, but your 10900K will not support them, so there is no point talking about them. The timings are decent, even on the higher clock models, where you can find them with relatively tight timings and latency of 17 or 18. During testing we ran into the same problem as the Vengeance RGB Pro model. The closer we got to the upper end of the overclocking, the more instability we encountered.

For visuals, we like the hairline shape of the RGB, but that is our personal preference. The Trident Z Lighting control tool works as expected and enables you to have a colourful dance in your PC case. We did have some struggles using third-party RGB control tools, but nothing major. The RAM is compatible and you can get the kit to work with Asus, MSI, Asrock and Gigabyte’s RGB tools. The inclusion of Asrock’s Polychrome Sync is an advantage over Corsair’s RAM.

Similar to it’s competitor, the Trident Z RGB RAM sticks are getting cooled with aluminum heat spreaders. They are wrapped around the PCB and on top of them you have the RGB strips.

We can’t really fault the G.Skill Trident Z for almost anything. Even though we weren’t able to get the kit running at the maximum speeds, the benchmarks were very satisfying. One thing we wished we could have seen are kits with white heat spreaders.

Last but not least is the G.Skill Trident Z Neo 32 GB kit. If we compare them with the Trident Z RGB you will find almost no difference, at least not for the 10900K. The main selling point of the Trident Z Neo is that they are Ryzen compatible. Despite that, they will work as advertised with an Intel CPU.

The choice is slightly reduced as the lowest speeds you can get are 2666 MHz and go as high as 4000 MHz. Like with the previous model, you have the option to go for a dual or quad setup. One thing we noticed is that the latency on some variations is just slightly lower than with the previous model. This may justify the higher price tag, as lower latency combined with tighter timings may give you a slight benchmark boost over the previous model. On top of that, the Trident Z RGB is considered the Neo’s predecessor, so if you want the latest and greatest, this is the kit for you.

Considering that this is the newer version, the heat spreader is slightly redesigned. Despite that, it still does its job as intended and keeps the heat away from the PCB even during some extreme overclocking situations. Visually, we like the previous model more than this one, mostly due to the color. We would have like to see a white model, but not only half-way, like the Trident Z Neo.

Heat spreader color aside; on the top, you have the recognizable hairline RGB strip. Nothing is changes in that department and you have 8 zones that you can control using G.Skill’s RGB tool. If you want to use another one, you are free to use MSI, Asus, Asrock and Gigabyte, as these RAM sticks are compatible with their RGB control tools.

In all honesty, we can’t really find too many faults with this RAM kit, but we also can’t find any advantages. YOu get a higher price tag for lower latencies, meaning that if you really need that extra performance, you may get it. As for the rest of the features, we are not too enclined to say that it’s worth it. Despite that, the G.Skill Trident Z Neo is an excellent RAM kit for your 10900K.

An often overlooked item when building a new PC is the RAM. A common mistake is not to pay attention to the RAM kit you get, and with that you will be sacrificing some performance.

To avoid that, we made a list of the best 5 RAM kits that you can pair with the 10900K. While we believe that these are one of the best, they are not the only ones and as always, you may find other options that you may like more.