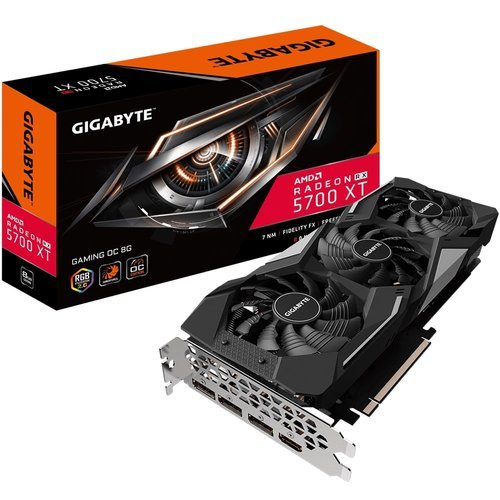 Introduction To The RX 5700 XT

AMD introduced its most powerful graphics cards in the RX 5000 line of GPUs. The RX 5700 XT is based on the RDNA architecture and its the successor to the AMD RX Series. Ultimately, they’re trying to provide affordable GPUs that pleases the mid/high range audience.

The point of the RDNA architecture is to accelerate already existing features such as Radeon Image Sharpening, FidelityFX, and VR technologies. Essentially, you receive greater performance and a crisper and clearer in-game experience going with the RX 5700 XT.

With these specifications, it renders it faster than the RTX 2070 by a slight margin, the only cards that are within its relative performance are the GTX 1080 TI and the RTX 2070 SUPER. Although it’s slower than the 2070 SUPER by about 8%, it still excels in certain games such as Battlefield V by about 8FPS. Essentially, you near 2070 SUPER performance for about $100 less, awesome price/performance.

The RX 5700 XT is actually a beast at 1440P gaming. Frame rate wise, it is on par with the RTX 2070 SUPER, and it has no problem running demanding games 60FPS+ at 1440P. You can actually reach 144FPS in battlefield 5 meaning 144hz gaming is possible with this GPU. The average frame rate in BF5 is around 100 FPS at ultra settings.

All the graphics cards in this list have the exact same chip underneath as the reference RX 5700 XT which uses a blower-style cooler. The graphics cards recommended in this list are referred to as “non-reference” GPUs which feature much better coolers, lower prices(some), and higher clock speeds(some).

In terms of raw performance, it’s around average needless to say. 1650 MHz for the base clock, 1795 MHz for the game clock and 1905 MHz for the boost clock. But this is only half the story, looking at the price which is close to MSRP, this is great value for the price and we haven’t even got into the cooling performance.

Moving onto cooling performance first let’s start with how the fans operate. Three fan designs are known to have issues circulating air(turbulence), GIGABYTE took this into consideration and made the center fan rotate alternatively. This essentially boosts efficiency and increases heat dissipation. The 3D active fan feature provides smart passive cooling, it deactivates the fans depending on the load of a game or application.

The heatpipes directly touch the GPU chip to ensure proper heat transfer. Additionally, the heatpipes covers the VRAM for even more cooling.

The WINDFORCE 3X cooling system design incorporates 3x80mm fans and 5 copper heatpipes with direct touch. The design is made to deliver effective and efficient heat dissipation and to maintain inaudible acoustics for immersive gaming. Aesthetically, there’s a metal backplate included which increases structural strength as well as adds a clean design.

Talking about raw performance, the ASUS RX 5700 XT comes top with the highest boost clock speed of 2035 GHz all the way from base at 1840 MHz. This applies if the graphics card is set to OC mode from where you get the most performance out of the card. In gaming mode, you only receive a boost clock of 2010 MHz from 1770 MHz. These are all generous clock speeds considering the reference cards boost is only at 1905 MHz.

The cooling on the card is fantastic and well thought through on ASUS’s part. All their ROG STRIX designed cards perform well thermally. On the back, there’s a high-quality metal backplate that passively disperses heat from the VRM and VRAM modules as well as reinforces the PCB. For general use, you would rarely see above 70C and at idle, you will see temperatures around 40C.

As for power, you should go for a 600W PSU to secure your graphics cards needs, after all, it comes heavily overclocked, and it’s already above the reference TDP. It’s always good to give decent headroom when working with graphics cards, they’re usually the most power-hungry devices in your system.

The overall design of the GPU is quite old. You can find the ROG STRIX design in numerous generations of GPUs. Because of this, ASUS has perfected the ROG STRIX design over the years and has created a perfect balance between aesthetics and cooling performance. You can see RGB accents around the cooler to give it some personality. Keep in mind, you can configure the RGB inside the software provided.

This is a fairly large GPU with a length of 305 mm, ensure in your PC case specification that you have enough clearance for the graphics card. You’re going to need three slots to install the graphics card also. Connectivity-wise, you have three DisplayPort 1.4a and an HDMI 2.0b

Here is another high clocked RX 5700 XT by PowerColor with a base clock at 1605 MHz, 1905 MHz game clock and a beastly boost clock at 2010 MHz. Considering these factory overclocks is important because it shows how much juice these GPUs really have. To allow such stable high clock speeds, PowerColor included 10 high-quality VRMs to ensure you have a stable operation and no crashes at high clock speeds.

The cooling on this card has to be decent knowing the 7nm Navi 10 chip runs exceptionally hot, especially at high factory overclocks. Well, PowerColor is using a 300 mm cooler with three 90 mm fans to cool the chip. Also, 5 heat pipes with a 30% surface area increase for more heat dissipation. And for silent gameplay, when the RX 5700 XT chip is below 60C, the fans will turn off.

With a TDP of 225W, it’s best to go for a 600W+ power supply to spare some juice for an already overclocked graphics card. While the card is more efficient than other RX 5700 XT’s, it’s still going to be the most power-hungry device in your system.

The fans are expected to have a lifespan 4x that of a typical GPU fan, this is because of the two ball bearing design which significantly increases longevity. On the PCB, it includes much higher quality components such as high-polymer capacitors and 10 power phases for stable overclocks. Additionally, you have a 1.5mm backplate which reinforces the card as well as passively cools the VRMS.

Performance-wise it is great excluding the TDP increase. You can expect results up to 1770 MHz base, 1905 MHz game, and 2010 MHz boost. It has similar speeds to the PowerColor red devil RX 5700 XT so this poses as a great alternative GPU if you find features here you like. This is definitely one of the best RX 5700 XT GPUs you can find on the market as it’s very feature-packed.

Moving onto cooling, GPUs with three fans suffer from turbulence, and the best way to solve it is by having the center fan rotate in an alternative direction. The center fan being slightly smaller rotates in a different direction to the two larger fans on the sides. This improves airflow and pressure meaning better cooling. In addition, the fans have been developed to increase static air pressure which consequentially cools the heatsinks much more effectively.

The TDP has been increased to 265W, because of this, the recommended PSU is now 650W(from 600W). This is the only downside when it comes to the performance, the graphics cards in general are already extremely power-hungry so you need to ensure you have enough headroom for it.

If you like stylish hardware, then this GPU is perfect. A lot has gone into it looking aesthetically good, it even features ARGB. ARGB is more advanced than traditional RGB since you are able to create much more complex effects with the GPU. The backplate also has some stylish aspects to it with the sapphire design on the back of it.

The performance of the MSI RX 5700 XT is average with a base clock speed of 1730 MHz, a game clock speed of 1870, and a boost of 1980. Nevertheless, it’s still higher than the reference clock with the boost clock having 75 more than the reference. If performance isn’t one of your main buying factors, then that’s understandable. Where this graphics card excels is in the cooling department.

Moving onto the cooling, the card excels in this department due to many factors. Just like most GPUs, having an aluminum backplate passively cools the power delivery components such as the VRM & VRAM lower the temperatures and increase the lifespan of the GPU. Also, the iconic TORX FAN 3.0 is fantastic at creating focused airflow ultimately increasing the static pressure and lowering the thermals. Even at max load, the average temperatures are around 60C, and when the temperature drops below 60, the fans stop for the ultimate silent gaming experience.

You have to give respect to MSI since the Navi 10 XT chip in fact runs very hot. MSI TWIN FROZR design shows proficiency when it comes to cooling, this is one of the best GPU cooler designs in terms of thermal performance.

Taking a look at the fans, it’s based on the Zero FROZR design which means any temperature below 60 degrees, the fans will not spin. If you value acoustics, then consider this feature to be valuable since GPU fans can make detectable noise, especially when they don’t need to be on. On the side panel of the GPU, you have DisplayPort x 3 (v1.4) and HDMI 2.0b x 1 for the outputs.

Recommended By The Editor