Building a gaming pc with the sole purpose is to game at 1080P is not only relatively affordable but easy to achieve. With the right build, you can achieve up to 144FPS on graphically intensive games, which allows for insane smoothness and response times over 60FPS with a 144Hz monitor. Alternatively, we’ve created a similar article for 1440P builds, if you’re interested, do check it out.

First, we must know which components go together well to create your dream PC build, in this case, we’re going for a 1080P system, so we’re not going to underpower or overpower the system for its specific purpose.

We’re going to keep it reasonable, a (1080P Gaming Machine @144Hz) seems pretty achievable without breaking the bank. So leave it to me, and I’ll put together all the components such as the CPU, GPU, RAM, PSU, Case & Storage, and I will leave the rest for you.

If you’re interested (not necessary), I’ll recommend peripherals such as monitors to get as much as your gaming system as possible. For example, pairing a 60Hz monitor with a system that can achieve 144FPS+ on most games is leaving performance on the table.

The purpose of this build is to deliver competent performance at 1080P at a reasonable price. You’ll be able to max most games out at 1080P, you can run Battlefield V with an average of 95 Frames per second at ultra settings. And Call Of Duty Warzone at around 100 FPS average. So this is a great build if you’re just trying to pass the 60FPS mark.

The Ryzen 5 3600 is a great budget processor that offers fantastic performance for the price. It has an average single-core performance of about 3.6 GHz base and 4.2 GHz boost. But it is a 6c12t processor which means this system will do great at heavily multithreaded tasks. Examples of multithreaded applications are – Web browsers, Text Editors, and very few games. Our cooler for this build will be the stock cooler that comes with the Ryzen 5 3600 to keep everything nice and cost-effective. The stock cooler is also known as the Wraith Cooler is more than enough to cool the Ryzen 5 3600, therefore you don’t need an expensive AIO.

Our motherboard is also budget, but it is of decent quality. Expensive motherboards usually come with arguable pointless gimmicks such as RGB, but this motherboard comes with all the essential features you need. It has a 4+2 phase module which will be sufficient enough to deliver power to the processor for standard non overclock use.

As for storage, a simple SATA 1TB SSD should do the trick perfectly fine; it’s the Samsung 860 EVO and it’s a great budget storage device. While it isn’t an M.2 NVME drive, it still offers blazingly fast loading times in almost every aspect + it’s still much more durable than a mechanical HDD. And the graphics card of choice is the EVGA 1660 TI. It’s extremely budget-friendly & it offers fantastic performance at 1080P. You should be able to max out most games, but you won’t reach the desirable 144FPS for 144Hz monitors. For that, we can only recommend a 60Hz 1080P monitor.

The case of choice is the Phanteks Eclipse P400S & the reason for this selection has to do with its simplicity. It is an extremely sleek looking case with subtle RGB, nothing too flashy and because of that, it comes at an affordable price. The power supply of choice is the Corsair CX 550W module which will definitely supply enough juice to your system, and on top of that, it’s 80+ bronze certified.

This monitor is a great pair for this system because it’s budget + it offers a refresh rate of 75Hz which is slightly better than 60Hz. Also, the monitor has decent picture quality for gaming and great color accuracy. Additionally, it has built-in speakers which not a lot of monitors have. If this is a feature you’re interested in, definitely pick up this monitor.

The purpose of this build is to leave it open for upgradability in the future & offer top-tier 1080P gaming performance at a reasonable price. You should be able to max out most games and even achieve the desirable 144FPS for 144Hz monitors in some games. Games such as CSGO will run with little to no effort, and you’ll have a competitive advantage due to the high framerates.

For the processor, we’ve upgraded from the previous build to the Ryzen 5 3600x. While not a huge upgrade, it still offers more single-core performance which games heavily rely on, plus this isn’t where most of the performance comes from. Cooling wise, we’re sticking with the stock cooler since AMD gives us no reason to purchase an aftermarket cooler. Their stock (Wraith Cooler) does the job exceptionally well & we’re going to keep this build budget-friendly.

For storage, we’re sticking with the 860 EVO 1TB SATA drive because it’s decently fast and it is much more durable than mechanical drives. We’re ultimately trying to keep the price of this build down by sticking with SATA drives since M.2 drives can get quite pricey. The graphics card of choice is the RX 5600 XT, and this graphics card’s main purpose is to game well at 1080P. You can often see it marketed as the “ultimate Graphics Card for 1080P Gaming”. Besides that, it should run graphically intensive games at max settings with a decently high frame rate.

The case of choice is the Fractal Design Meshify C. The reason for this choice of case is because it’s fairly simple in terms of aesthetics (you can’t go wrong with that), and it’s designed to have streamlined airflow. It’s also very spacey meaning you can fit a lot of hardware into it. For the power-supply we’re going to select a high quality unit since the PSU is the most important component for your build. The EVGA SuperNOVA G3 550 should supply enough high quality power to your system.

Our recommended monitor is a 23’8 inch 1920×1080 144Hz monitor which suits this build perfectly since the RX 5600 XT will be able to achieve 144FPS in most games. Moreover, the monitor has freesync capability which reduces frame stutters when gaming. This is a feature exclusive to AMD GPUs.

This build serves as an entry level to RTX Ray tracing gaming. You’ll be able to enjoy titles that allow for advanced Ray tracing lighting at 1080P due to this system containing an RTX graphics card. Also, you’ll be able to perform other tasks besides gaming such as video editing thanks to the fast multicore processor.

The processor of choice is the Ryzen 7 3700x, this is a mid-top tier processor, and it’s seen as a multipurpose processor. It’s great for gaming since the single-core performance (4.4GHz) is fast enough. For our cooling solution, we’re sticking with the stock cooler (Wraith Cooler) because it’s high quality and most importantly, it’s free.

We’re sticking with the Asus AM4 TUF Gaming X570-Plus motherboard because it’s high quality and it has useful features such as built-in wifi. The most important reason why we’ve picked this motherboard is that the VRM is fairly high quality & that’s very useful for overclocking. The RAM of choice will include RGB which adds spice to our build, you can’t really go wrong with RAM. Just make sure it’s fast because AMD processors heavily rely on the RAM speed.

The storage we’re using for this build will be a SATA 2.5 1TB SSD which is more than enough for our needs. Loading times across the board will be extremely fast compared to traditional mechanical hard drives. Now, the graphics card is fairly powerful and it’ll be able to max pretty much all games at 1080P. But the reason for this selection is because it gives the user the ability to use Ray Tracing in games.

The chassis we’re using is quite minimal in terms of aesthetics. It is quite good in terms of airflow since it has 2xAer f120MM fans for streamline airflow, also it has a pre-enhanced cable management system. The system will use the EVGA G3 550W power supply because the components, although powerful, do not require that much juice. The G3 line of power-supplies by EVGA is arguably the most high-quality power supplies you can find at a decent price. 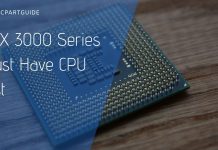 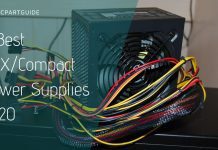