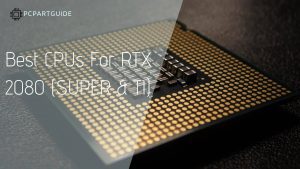 The RTX 2080, 2080 SUPER and TI, are high-end graphics cards, they’re typically used for 2K & 4K gaming. In this post, you’ll find the best CPU to fulfill your needs, there are a variety of processors ranging from affordable to overkill.

As of now, you shouldn’t consider purchasing a CPU for the RTX 2080, SUPER, OR TI pair unless you already have one of these cards. The new Ampere RTX 3000 series GPUs are better than the Turing 2000 GPUs in every single way. The RTX 3070 is more powerful than the 2080 TI, and it’s more than half the price.

The RTX 2080, SUPER & TI are part of the NVIDIA 20 Series released back in late 2018, and they’re still regarded as high-end graphics cards used to run triple-A games at the highest settings.

A Top tier processor with a top tier GPU makes for an amazing combination. CPU Bottlenecks will be very minimal, allowing for your GPU to be used to its full potential. Also, you’ll be more future-proofed in the CPU department, you’ll most likely be upgrading your GPU before your CPU.

The predecessor of the 10700K was the I7 9700K, and that was the first generation of I7s not to have hyperthreading. However, Intel has decided to give the I7s their hyperthreading capabilities back to the 10th iteration of processors. That brings the 10700K up to an 8core 16thread processor clocked at 3.8GHz base and 5.1 GHz boost, it surpasses the I9 9900K in single-core performance because of this.

You will be able to get more out of your graphics cards using the I7 10700K over the I9 9900K, you can expect a few more frames in-game. Just so you know, if you’re upgrading from an LGA1151 processor, you’ll need to change to an LGA1200 motherboard, it’s the home for Intels new Comet Lake processors.

Choosing the I7 10700K over the I9 10900K will save you quite a bit of money, and the performance difference is negligible. Only if you not looking to leave any performance on the table when it comes to gaming, then I’d recommend the I9 10900K over it.

Let’s not forget that the 10700K has pretty decent overclockability; there are some overclocks that push the chip to 5.3GHz on all cores which is pretty amazing, that’s performance on par with the 10900K with single-core performance. Remember, before you overclock, ensure you have sufficient cooling.

The I7 10700K is the upgraded version of the I7 9700K so you can only expect higher frame rates from this processor which is indeed the case. The i7 10700k is perfect for gaming, overclocking, and streaming this is because it comes with 8 cores and 16 threads which is more than enough to perform multi-core tasks.

The I9 9900K once known as the best gaming processor has been surpassed by the I7 10700K & I9 10900K, however, it’s still a very competent gaming processor with insane single-core performance, and the 9900KS even more so. The 9900KS is basically a pre-overclocked 9900K, that can reach 4GHz on all cores out of the box.

As for specifications, the standard 9900K out of the box is an 8c16t processor clocked at 3.6GHz base, and 5GHz boost which is an extremely competent gaming processor, you can pick one up at around $500 which is cheaper than its successor 10900K.

As for features, it comes with a pretty competent integrated graphics (Intel UHD Graphics 630) which isn’t all that important since you’ll be using a dedicated GPU. Unfortunately, it doesn’t come with a stock cooler but we can help you find a decent aftermarket cooler – Best CPU Coolers For I9 9900K/KS!

On AMD’s side, the Ryzen 9 3900x is the closest competitor to the 9900K, it has 12 cores and 24 threads at a very similar price, straight away the 3900x looks better, however, the 9900K is better for gaming. The reason it’s better for gaming is because of the single-core performance which games heavily rely on.

One thing intel is good at is producing a great gaming processor. The I9 9900K will be able to game for many years, it is pretty future-proof in that case. The i9 9900K will outperform its closest competitor which is the Ryzen 9 3900x at gaming, this is because the I9 9900K has better single-core performance.

So if you’re looking to primarily game and maybe stream and perform tasks that require multiple cores, the I9 9900K is the best processor for you. On top of that, if you’re keen on overclocking, the support is quite extensive with intel processors which have the “k” at the end of their name, so if you’re looking to push your processor to its limits and achieve higher frame rates, then the I9 9900K is a great option.

The Ryzen 9 3900x is a multi-core monster that’ll process almost anything you throw at it. If you’re considering gaming, then you have decent single-core performance to back you up. On top of that, if you’re a streamer, the 12c24t that comes with it will ensure you have no stream lag.

Its competitor which is the I9 9900K is fantastic at gaming, and it will almost always outperform the 3900x, but when it comes to multi-threaded performance, the 9900K stands no chance, the 3900x will leave it in the dust. The 12 cores and 24 threads clocked at 3.8 GHz base and 4.6 GHz boost is just too much to handle

To go with the 3900x, you have a stock cooler that will be perfect for normal applications, consider picking up an aftermarket cooler if you’re going to use it for niche applications. Since the TDP is pretty low (105W), the stock cooler should be more than enough.

The Ryzen 9 3900x is a top-of-the-line processor because it has amazing single-core performance, as well as having a decent number of processing cores. This means this processor is perfect for multi-tasking such as gaming and streaming at the same time.

Additionally, if you’re looking to do more than just gaming, perhaps video editing, the extra cores will come in handy as video editing heavily relies on the processor. The weaker versions such as the Ryzen 7 3700x, and the Ryzen 5 3600 will not be able to compete with the Ryzen 9 3900x when it comes to task which require multiple cores (video editing, streaming)

The processors in this tier have been regarded as mid-top tier. You can find processors with fantastic single-core performance, and others with amazing multi-threaded performance, but most importantly, they’re affordable.

The Ryzen 5 3600 6c12 processor clocked in at 3.6 GHz base and 4.2 GHz boost, and it compares directly to Intel’s brand new I5 10400. The 10400 is a great processor, but the Ryzen 5 3600 comes cheaper, and the performance when it comes to gaming is pretty much the same. And it has a higher base frequency, so the multithreaded performance will definitely be better, so for that reason, I recommend the Ryzen 5 3600 for mid-tier gaming.

And thanks to the low TDP, the Ryzen 5 3600 doesn’t generate that much heat, so you’ll be able to do fine just with the stock cooler. I wouldn’t recommend anything more than the stock cooler unless you’re doing some pretty crazy overclocking.

In most games, the I5 10400 will outperform its competitor which is the Ryzen 5 3600 when it comes to average frame-rate but not by much. In other words, it’s a great budget processor that shouldn’t be overlooked, it beats the previous generation of AMD processors by 10%.

If you’re looking to game only, then the Ryzen 5 3600x is perfect for the simple fact that it’s cheap, and it will outperform its closest competitor, the I5 10400. Additionally, it comes with a free stock cooler which will save you money, perfect for budget seekers.

If you’re looking to perform more tasks than just gaming, then you may require a slightly more powerful processor, typically with more cores, but the Ryzen 5 3600 is perfect for gaming as it has decent single-core performance.

When it comes to acquiring the best bang for buck CPU, there is no doubt the Ryzen 7 3700x is the main talk of the topic. It has decent single-core performance which is – 3.6GHz base, and 4.4 GHz boost. Also, it has great multi-threaded performance being an 8c16t processor. And it’s able to do all of this without consuming a geat ton of power.

Feature-wise, it comes with a stock cooler, and considering the 3700x is pretty efficient, the stock cooler will be enough for most uses. This is also an unlocked chip, so feel free to push the limits of your CPU by overclocking.

The Ryzen 7 3700x is significantly cheaper than its competitor the I7 9700K, it comes with a free stock cooler, and you can pair it with a budget motherboard and it still competes closely to that of the 9700K.

The Ryzen 7 3700x fits in almost every build, it goes well in budget and in high-end builds, this is because it offers the best bang for your buck, you cant really go wrong with this processor.

This is an 8c8t chip clocked at 3.6 GHz base, and 4.9 GHz boost, therefore it has great single-core performance which is perfect for games. Also, if you’re feeling courageous, you can push the clock speeds past 5GHz by playing with the settings; so you’ll be able to match the I9 9900K in gaming performance.

The difference between the 9700K and the 9700KF is that the 9700KF is missing integrated graphics. So it’ll make better sense to go for the 9700KF considering you’ll be using an RTX 2070 or 2070 SUPER instead. Go with whatever’s cheaper, likely the KF will be cheaper due to the disabled silicon.

There is no stock cooler to come with the I7 9700K, so you’ll most likely need to pick up an aftermarket cooler. If you don’t already have a cooler lying around, check out this dedicated guide regarding the Best Coolers For The 9700K.

The i7 9700K much like the I5 9600K has amazing single core performance which is necessary for gaming, the I7 9700K performs perfectly well at this task, the only missing component which is common among i7s is hyperthreading.

So, if you’re looking to just game, the I7 9700K can do that at a price much cheaper than the i9 9900k. Many gamers couldn’t care about streaming, or posting videos, so processors like this exist for their specific needs.