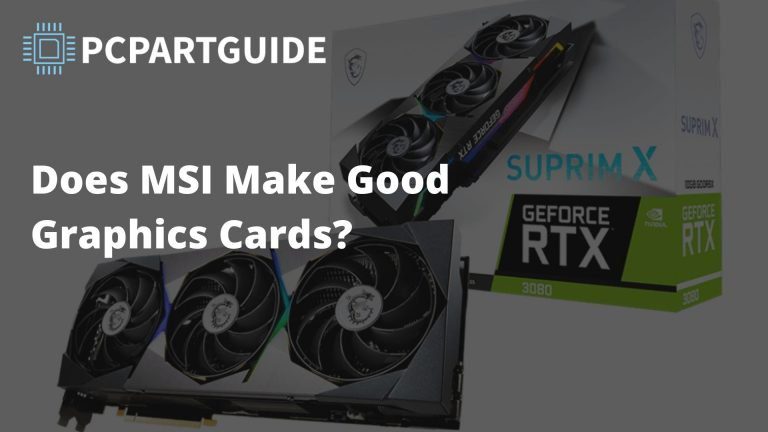 When purchasing a specific graphics card, you will quickly realize that there are many versions of that same graphics card coming from different vendors. This can often make choosing a graphics card difficult as when buyers are presented with many options, it can slow down their buying process. The most popular graphics card vendors are MSI, GIGABYTE, ASUS, ZOTAC, EVGA, and there are many more.

Answer: MSI is a reliable company that you can rely on when purchasing a graphics card, many of their GPUs will feature superior cooling solutions compared to the reference GPU. Also, the graphics cards feature higher clock speeds and more durable designs, they often feature backplates that can protect the GPU. You will have many options to pick from with MSI, users will usually pick the GPU that looks aesthetically pleasing.

In terms of looks, it can be quite subjective as many will have different opinions on what will look good in their system, but MSI graphics cards tend to look pretty great. Many of their graphics cards come with three fans for optimal cooling, this can look great in certain configurations. Some of their graphics cards will come with backplates which can look great as well as provide passive cooling, the suprim x GPUs tend to come with backplates. Also, RGB is a common aspect with their GPUs, it is fairly customizable so you can make it match your overall aesthetic.

Quality-wise, their graphics cards can be seen as high quality, this is important as GPUs tend to have pretty short lifespans. MSI graphics cards are regarded as being reliable, they don’t use cheap materials, and they often come with impressive cooling solutions. The fans they use are often high quality and feature bearings that can last a very long time as well as operate at a quiet level.

The cards that come pre-overclocked mean you do not have to overclock your graphics card and risk damaging it due to overvolting it. Also, the MSI graphics cards including their higher boost clock speeds should produce lower temperatures compared to reference cards, reference cards usually do not have the best coolers installed, and many gamers will often replace the cooler for a better one.

Should You Buy Based On Clock Speed?

Aftermarket/Custom graphics cards will usually feature higher clock speeds, in this case it would generate higher frame rates compared to the standard reference card. When you’re purchasing aftermarket GPUs you’re mainly paying for the better cooling solutions, boost clock speeds, and aesthetics. You can easily overclock your reference graphics card to meet the specifications of an aftermarket GPU, just ensure you have great airflow.

To have the boost clock speed work effectively, you need effective airflow and temperature control as this is the biggest factor. The graphics card won’t boost unless it sees enough temperature headroom to do so, if your GPU is already hot due to insufficient airflow, then it won’t boost, and may even throttle. Luckily, reference graphics cards usually have lower thermals compared to reference GPUs, so you can expect it to boost more often.

The verdict is that MSI produces decent graphics cards that can easily beat the reference graphics cards in many aspects such as clock speeds, cooling and aesthetics. Many of the aftermarket MSI graphics cards will feature higher boost clock speeds with the same TDP, so the GPUs are more efficient thanks to the superior cooling solutions. The downside to MSI is that their customer support isn’t very liked, so we recommend picking up your MSI GPU from Amazon or another supplier.