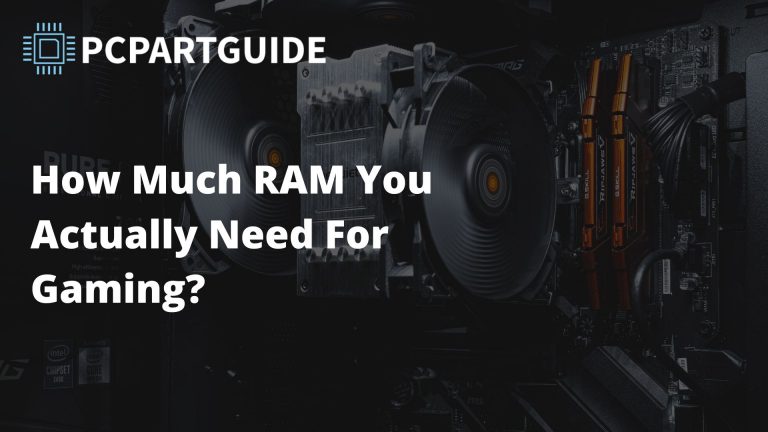 It is no secret that putting together a gaming PC requires a lot of thinking. Picking RAM for your gaming PC can be one difficult decision, especially for beginner builders.

In this guide, there will be three types of builds we’re going to focus on. The Budget-End Gaming PC, Mid-End Gaming PC & the High-End Gaming PC. You will find out the appropriate RAM capacity for each PC build.

For more picking the correct RAM capacity, continue reading. Choosing RAM is about knowing exactly what you want out of your gaming computer. Once you know your budget, and figure out the type of games you’re going to play, you will be perfectly fine.

What Is The Right Amount Of RAM For A Gaming PC?

The needed amount of RAM differs for each game. If you know what type of games you enjoy playing, buy the correct amount of RAM for specific games. For example, FPS games like CSGO have a specific RAM requirement that should be met.

How Much RAM For Budget-End Gaming?

For budget tier gaming, we’re going to be focusing on the minimum RAM capacity recommended by most games. Nowadays, 8GB of RAM is considered the bare minimum for games. 8GB of RAM is around $40, you can pick up some decent RAM and start gaming.

What Games Can I Run With 8GB Of RAM?

Most games of the latest games are able to run on a system with 8GB of RAM. However, you will encounter games that are intensive on the RAM causing stutters and other unplayable experiences.

The games you can play with minimal issues are:

As games are getting more demanding, and hardware is getting better, 8GB of RAM will soon become a thing of the past. It’s not such a bad thing once you realize that you can upgrade your PC components at any time.

Pro Tip: Make sure you’re not pairing 8GB of RAM with a powerful CPU or GPU. For example, don’t pair a GTX 2080 TI with 8GB of RAM, or 8GB with an i9 9700K. RAM can actually bottleneck your hardware.

8GB will suffice if you decide to play titles that are not too demanding or some old but very popular games like CSGO. Just because a game is old, doesn’t mean it won’t use a lot of RAM. games like Cities Skylines can use well over 32GB of RAM. Just be wary.

Moving on to more demanding games like Battlefield V, you may require more RAM to game effectively. With 8GB of RAM, you will encounter FPS stuttering which occurs when your RAM reaches 100%.

How Much RAM For Mid-End Gaming?

For Mid-End Gaming, the recommendation is 16GB of RAM. 16GB of RAM is considered the sweet spot of today’s standard. If most games recommend a minimum of 8GB of RAM, then 16GB of RAM should provide enough headroom for gaming.

With 16GB of RAM, most games will never run out of RAM, and it’s one of the first steps to 4K gaming.

The only time you will have problems with 16GB of RAM is if you’re playing modded games, such as GTA 5 Mods or Minecraft Mods.

What Games Can I Run With 16GB Of RAM?

You can pretty much play all games with 16GB of RAM, but there are some exceptions. With modded games, you may require more RAM, typically around 32GB of RAM.

Also, some simulation type video games such as DCS World 2.7 will use a ton of RAM due to the nature of the vide game loading many assets at once.

But if you’re the average gamer, 16GB of RAM should be perfectly fine for most triple-A games.

What Are The Benefits Of 16GB Of RAM?

16GB of RAM smooths everything out, and you wouldn’t only just benefit from it gaming wise. An upgrade from 8GB of RAM will usually make a huge difference FPS wise. Some games net a 50% FPS increase just by upgrading from 8 to 16GB.

Looking at Just Cause 3, it has a reputation of being intensive on the RAM. 16GB of RAM in this scenario is highly recommended, and upgrading from 8 to 16GB of RAM will result in a huge performance increase.

How Much RAM For High-End Gaming?

For High-End Gaming, 32GB+ will really provide you with a lot of headroom for games & the future. Gamers that want the ultimate gaming rig are investing in a lot of RAM to future proof their system, and receive the most performance possible.

ATX & Micro-ATX motherboards can easily support up to 64GB of RAM. You may think 64GB of RAM is unnecessary, but there are so many games that can consume a lot of RAM. Take a look at Minecraft, if you’re running a lot of mods, you can potentially end up using more than 50% of your RAM.

With 32GB of RAM, you should be able to play 99% of video games perfectly fine, there’s little scenarios where you’ll saturate your entire memory capacity.

32GB of RAM is perfect for simulation type games and modded games, or if you like having the extra headroom, then that can be a huge benefit.

How Much RAM For 4K Gaming?

If you’re not trying to spend too much money on RAM, and want just enough RAM to game, then we recommend at least 16GB of RAM, this will ensure that you have enough capacity for most games.

16GB is considered the sweet spot at the moment, just like 8GB of RAM was once considered back in the day, so it won’t be quite future-proof.

For future-proofing, we recommend at least 32GB of RAM. Not only will this future-proof your system, it will allow you to do much more than 16GB of RAM can do.

With 32GB of RAM, your system is more multipurpose orientated allowing you to do professional work as well as play games at the same time.

Also, for RAM-intensive games, you will have enough RAM to play them too therefore 32GB of RAM is considered the safe option.

Just ensure that you don’t spend too much money on RAM, as spending more than necessary is just a waste of money.

If you’re not going to use the RAM full capacity, then that money could’ve gone to purchasing better components.

It’s always worth knowing exactly what you’re going to be using before you purchase it so you don’t waste a lot of money.

Is 32GB Of RAM Necessary For Gaming?

You will hear a lot that 32GB+ of RAM is overkill, for general use, yes. But it depends on your intentions and how you utilize the RAM. For strict gaming, 32GB+ of RAM is only necessary if you’re future-proofing or playing games that use a lot of RAM.

If you’re going for 32GB of RAM regardless, then go Quad Channel. It looks cooler and you get more performance over a dual-channel RAM config. 2×16 will be outperformed by 4×8 due to more memory bandwidth for the CPU.

Before going for a Quad Channel setup, ensure your motherboard has Quad-Channel support. You can tell by the RAM slots. Four slots should be of the same color, & a total of 8 RAM slots.

The only downside I see from going Quad Channel is price. You will slightly more for a Quad Channel setup, around $5 per GB.

Pro Tip: Always practice good memory management, especially if you’re low on the RAM capacity. What I mean by this is closing unused applications when running games. Typically, many gamers have chrome open for no reason, at least close the taps you’re not using.

So, it seems like you can do perfectly fine with just 16GB of RAM, however, there are some gaming scenarios where more RAM can be advantageous.

For example, with modded video games, they tend to be more unoptimized which means they will use more RAM, so if you’re going to play modded Minecraft, GTA, or Skyrim, you may require 32GB of RAM.