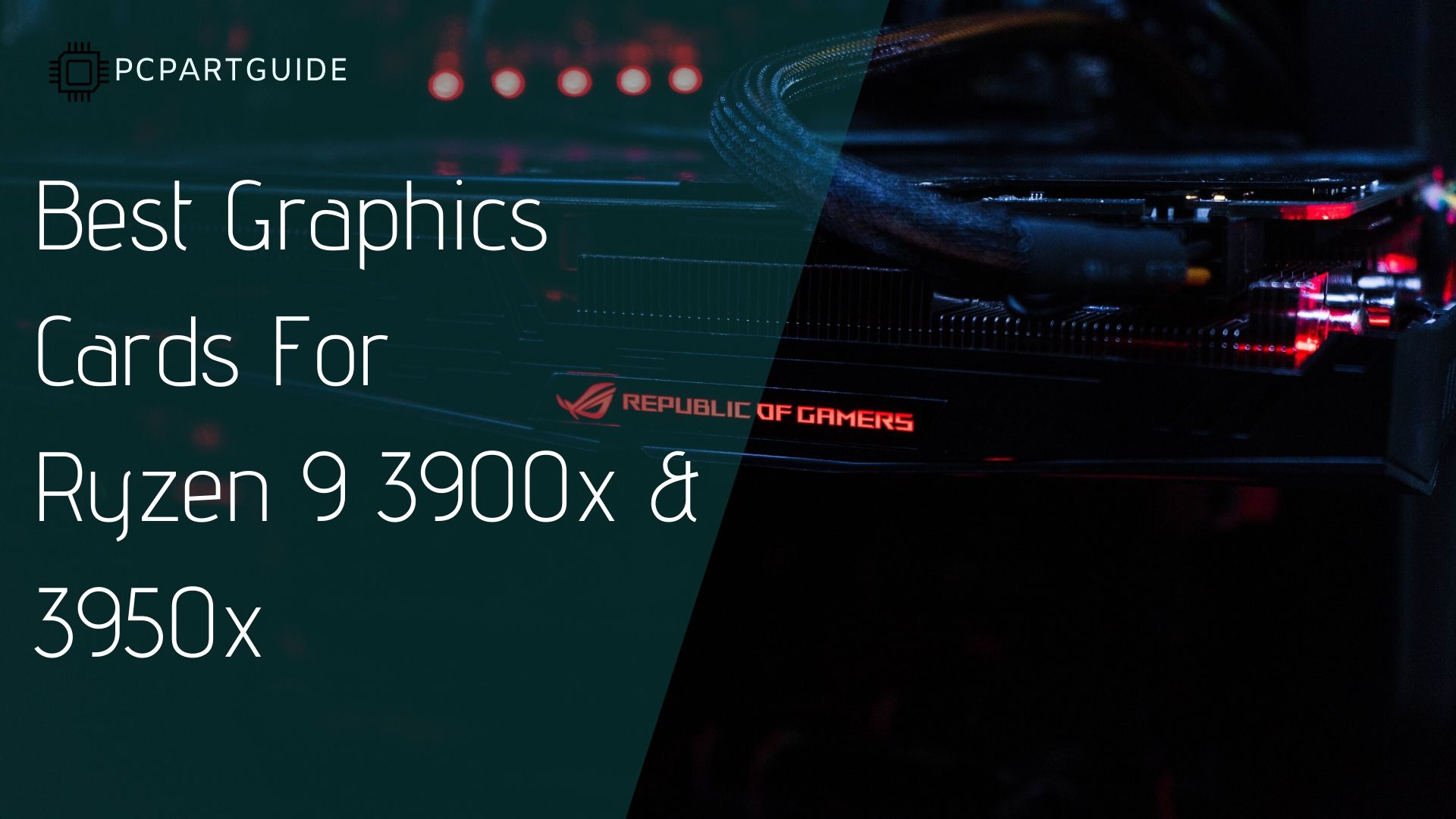 The Ryzen 9 3900x and the Ryzen 9 3950x are top tier processors that are more than enough for 2020 & they will suffice far into the future. These processors directly compete with Intel’s top processors such as the Intel I9 9900K in gaming & they actually surpass Intel’s processors in productivity tasks.

Both the Ryzen 9 3900x and the Ryzen 9 3950x are based on the Zen 2 architecture, and it’s the successor of the Zen+ architecture. The architecture was released back in July of 2019, it uses as a 7nm fabrication process which means it can offer more processing power much more efficiently than 12 or 14nm bases processors.

Currently, Ryzen 9 offers some of the best performance you can find as its fairly new technology. Most of the processors are absolute beasts in gaming & productivity tasks, all the processors offer higher memory and wider bandwidth than the previous generation of processors.

These are top tier CPUs in 2020, they go best with powerful graphics cards, also, they don’t have integrated graphics so you cannot really do much without a decent GPU in your system. Whether you’re gaming or video editing, the Ryzen 9 3900x or 3950x are made to handle heavy loads.

Graphics Cards That Are Best For 4K+

Pairing a graphics card that runs 4K effortlessly with the Ryzen 9 chips such as the 3900x and 3950x makes perfect sense as they’re both top tier in their own respective. You don’t want to pair a weak GPU with the Ryzen 9 chips as you might incur a CPU bottleneck. These are top-performing GPU’s for a top-performing CPU, consider picking up one if you’re going to be gaming at 4K 60FPS.

At the moment, this is the most powerful graphics card whether it’s for productive tasks such as deep learning, video editing or gaming besides the RTX 2080 TI. NVIDIA went all out with the TITAN RTX reaching new levels of performance, it even outperforms the RTX 2080 TI.

Professional applications such as video editing, and deep learning benefit from more VRAM. Well, the TITAN RTX has 24GB of it which is a whole load of VRAM to work with, you’ll likely never need to upgrade for a very long time.

While not the cheapest, purely from a performance perspective, the TITAN RTX is one of the best GPUs when it comes to deep learning. It has a slight edge in performance over the 2080 TI; the 2080 TI is about 8% faster in FP32 training performance, and 21% faster in FP16 training.

It has slightly more Cuda Cores(4608) than that of the 2080 TI(4352). Also, it’s clocked slightly higher which makes this a more effective card when gaming. If you’re considering playing at very high resolutions, the 24GB of VRAM will make sure you’ll never suffer from stuttering and FPS drops.

The design of the TITAN RTX is the founder’s design which looks and operates at a premium level, however, the fan design is known to expel a lot of heat into the case. Proper ventilation in the case is recommended. As for the ports, it has 1xHDMI & 3xDisplayPort ports.

Right now, if you’re looking for the best gaming graphics card, the RTX 2080 TI is that card for the fact that it offers practically the same performance as the TITAN RTX for half the price. The 2080 TI handles 4K gaming with ease reaching 4K @60FPS with most triple-A video games.

It can also handle professional workloads such as video editing. It has 11GB of VRAM, while it isn’t 24GB, it’s still more than enough for 2020. Additionally, the 11GB of VRAM will ensure that you’ll never stutter in video games, and if you’re fond of mods, you’ll be able to run them with ease.

Regarding the core performance, the TITAN RTX is only marginally faster by about 12%. The RTX 2080 TI has 4352 Cuda cores, a base core clock speed of 1350 MHz, and a boost of 1755 MHz. With the RTX Tensor cores, machine learning tasks become straightforward, and performance within video games can benefit from utilizing NVIDIA DLSS.

The design of this 2080 TI uses the TRI-FROZR design which is better than the founder’s cooler at keeping the cores cool and staying silent when operating. The ports the MSI TRI-FROZR RTX 2080 TI have are 1xHDMI & 3xDisplayPort Ports.

4K Gaming with the RTX 2080 SUPER is relatively easy since you have 8GB of VRAM which is considered the minimum recommendation for 4K. However, you shouldn’t be concerned about the VRAM unless you’re heavily modding video games at 4K.

As far as overclocking goes, the OC potential is very small with the EVGA RTX 2080 SUPER, if you’re going for overclocks, the 2080TI is your best bet.

The design of the RTX 2080 SUPER looks clean and premium. When the card is plugged in, you can see the EVGA RTX 2080 SUPER logo illuminate in an RGB fashion. You should definitely go for a PC case with a clear side panel. In terms of ports, it has 1xHDMI & 3xDisplayPort ports.

The XFX AMD Radeon VII is a decent top-tier graphics card that competes directly with the RTX 2080, this means the Radeon VII will be faster than the RTX 2080 in certain games and vice-versa. With this graphics card, you’ll be able to achieve amazing frame rates at 4K and 1440P

With 16GB of HBM2 VRAM, you’ll be able to run games at 4K with ease as 8GB is the general minimum for 4K gaming. The HBM2 RAM generally works well with professional tasks such as AI machine learning. This is due to the massive memory bandwidth it has, this is where it excels over GDDR6.

Let’s not forget that this is the first GPU to use a 7nm fabrication process which drastically improves performance and efficiency. This is a milestone set for AMD.

The design utilized is the reference design, it comes in at a length of 280mm which is fairly sensible in size however, always ensure you have enough clearance for the GPU. For the ports, it has 1xHDMI & 3xDisplayPort Ports

For 2K gaming, these graphics cards are genuinely more price-friendly, and the performance is usually just enough to run graphically intensive games well at 1440P. The graphics cards here go well with the 3900x & 3950x as they’re still relatively high-tier.

Cooling performance for the SAPPHIRE RX 5700 XT is superior to many of its counterparts, especially the ones with the triple fan design. What SAPPHIRE does differently, it rotates the center fan so it eliminates turbulence which inhibits optimal cooling. Additionally, the fans have been improved to increase static air pressure.

If you’re looking for a well capable graphics card that can run 2K, then the RTX 2070 SUPER will be perfect for you. It can also have Ray-tracing capabilities to graphically enhance the video game you’re playing. Without Ray-tracing, you can do 144 frames @1440P with most Triple A games with high-ultra settings. If you’re playing CSGO, you can easily do 144 frames for 144hz which offers a competitive advantage.

The cooling of the EVGA 2070 SUPER is sufficient enough maxing at only 60c at full load, and it usually idles around 20-30 degrees. This is all possible thanks to EVGA ICX2 cooling which enhances the baseplate, heatsinks, and the fans. You may experience a slight coil whine when using this GPU.

The design is new and unique, the actual cooler is black and semi-transparent which looks pretty cool with the RGB lighting emitting from it. You can control the RGB through the software provided. It also has a backplate to aid with heat dissipation and durability. In terms of ports, it has 1xHDMI & 3xDisplayPort Ports.