The Ryzen 5 5600x is part of AMD’s brand new Zen 3 microarchitecture released on November 5th, 2020. It is a hefty processor especially for gaming, it surpasses the I9 10900K in most gaming experiences and the best thing about the processor is that it is fairly cheap.

If you’re on a budget, the Ryzen 5 5600x is a great bang for your buck, it’ll save you money or even allow you to buy an even better GPU if you were to go for a more expensive CPU. With the Ryzen 5 5600x, it will go great with top-tier GPUs in gaming scenarios because of the great single-core performance it offers, you’ll experience minimal bottlenecks especially at higher resolutions.

The AMD Vs NVIDIA war never ceases to exist, this is because they are two massive competitors in the graphics card market. They both have their strengths and weaknesses, and there are compelling reasons to go for either one of them.

It is often said that AMD is for the budget users who want an affordable GPU, and NVIDIA is for the high-end users that want the most performance. Let’s test this statement and see how true it is.

The cheapest option isn’t as clear as it was back in the day, it used to be NVIDIA producing the pricier cards, and AMD producing the affordable option. However, things have changed and since competition is fierce, it seems that NVIDIA is now providing more affordable cards.

A good way to look at this is to take a look at the price to performance ratio of the latest graphics cards. Whilst AMD still dominates the top spot with the Radeon RX 570, NVIDIA has a few amazing budget cards such as the GTX 1650 SUPER, and the GTX 1660.

Always check the MSRP of a graphics card to make sure you’re getting a good deal.

What Are The Graphics Cards Specifications

GPUs have THOUSANDS of cores whereas general CPUs only have a few. The reasoning for this is that GPUs are able to process a small subset of data extremely quickly. The clock speed of these cores operates in the MHz range.

What Is Graphics Card RAM/Memory?

If you didn’t know already, graphics cards actually have onboard memory which goes by the name of Video RAM(VRAM). The graphics card memory is responsible for storing and rendering each pixel you see on the screen. Specifically, the VRAM will be storing data such as geometry, texture, and terrain data.

The type of memory used by graphics cards is GDDR which stands for (Graphics double data rate). GDDR has similarities to DDR, but GDDR is built for higher bandwidth due to its wider memory bus.

You’re probably wondering how much VRAM do I need, well that mostly depends on the resolution you’re processing data at. More VRAM usually means the GPU can process higher resolutions easier. 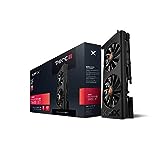 The graphics cards here are perfect for 1080P systems, they aren’t too expensive, and they provide enough performance to have a decent gaming experience. If you’re going for a budget gaming system, then these 1080P graphics cards are perfect for you. 1080P is the easiest to run out, but the image quality will not be as impressive as 1440P or 4K.

For resolutions around 1080P, the 1660TI performs well on most games achieving over 60FPS, higher resolutions such as 1440P may require tweaking of the graphical settings depending on the game. Games such as CSGO or League Of Legends do not require a beefy GPU therefore the 1660 TI will do just fine.

It has 1536 Cuda Cores clocked at 1500 MHz base and 1830 MHz boost and 6 GB of VRAM. The VRAM capacity is there to support higher resolutions but as previously stated, you may need to play with the settings to get an optimal gaming experience.

The 1660 TI supports ray tracing despite being a GTX graphics card, however you may not be able to get a playable experience with ray tracing enabled due to its ray tracing capabilities being limited.

As for the design, it is quite small coming in at 204MM, this will greatly increase the possibilities of ITX builds you can put together. As for the ports, it has 1xHDMI & 3xDisplayPort Ports.

Why Should You Pick The GTX 1660TI

With the emergence of ray tracing, it could appear to be out of reach for a lot of budget seekers however, the GTX 1660TI comes equipped with this technology so this means you’ll be able to utilize ray tracing at 1080P.

So if you’re a budget enthusiast, don’t feel pressured to jump to 1440P as 1080P is still a great resolution and can offer a lot of performance for a budget price. Remember, it’s easier to game at 1080P than it is to game at 1440P and 4K.

For a better bang for your buck, the RX 5600 XT excels in 1080P gaming for a cheaper price, this is because the 5600 XT’s main purpose is to game well at 1080P. You’ll be able to max out most games at 1080P, and even some in 1440P depending on the title. Fortnite at 1440P averages about 80 FPS, while smooth it isn’t exactly the best for competitive scenarios.

The design of the GPU is quite cool and unique, most non-reference graphics cards are flashy with a lot of RGB, but this graphics card is more on the minimalistic side having no RGB and a stylish design. For the Outputs, the XFX 5600 XT has 1xHDMI & 3xDisplayPort Ports.

On paper, the RX 5600XT will generate more frames per second, however, it lacks the ray-tracing support, so if you’re happy abandoning ray tracing for superior gaming performance, the RX 5600XT is the better choice compared to the GTX 1660TI.

1440P gaming is a balance between performance and image quality, it is the new sweetspot and most competitive gamers use this resolution with their monitors refreshing at 144Hz. You can pick up a decent 1440P graphics card for a decent price for example the RTX 3070.

The RTX 3070 is a shockingly great graphics card for good reason; it essentially stuffs RTX 2080 TI performance into a graphics card more than half the price (MSRP $499), this means you no longer have to break the bank spending thousands on a GPU for top-tier performance.

You’ll be able to max most games out at 1440P, and 4K shouldn’t be an issue either with most games achieving at least 60FPS for example, Far Cry 5 reaches 75FPS average. But 1440P offers more stability with games reaching up to 144Hz which feels far better than a 60Hz monitor.

The MAIN reason why this is a perfect 1440P GPU is because of the lack of GDDR6 VRAM. 8GB of VRAM may not be enough to process a game at 4K causing stuttering, so we believe 1440P will offer the smoothest gaming experience.

The RTX 3070 features superior ray tracing capabilities to its predecessors, this makes sense as the 3070 is part of NVIDIA’S latest lineup of GPUs, the Ampere series.

It also has superior DLSS AI processing due to it having superior tensor cores compared to the NVIDIA RTX 20 series graphics cards, so you’ll be able to get far more FPS with this AI upscaling technology.

The RTX 30 series graphics card switched up the game when it comes to performance to price, in this line of graphics cards, you can find big bang for your buck GPUs and one of these cards is the RTX 3070.

The RTX 3070 is the upgrade version of the RTX 2070, and it is identical in performance to the RTX 2080TI at more than half the price, so for insane 4K gaming performance, the RTX 3070 is a great choice if you’re able to pick one up.

It’s closest competitor is the RTX 2070 SUPER which is also a great 1440P graphics card. The RX 5700 XT often comes neck and neck with the 2070S, sometimes beating and losing. If you enjoy Battlefield V, the RX 5700 XT will offer more frames per second than the 2070S.

The Sapphire RX 5700 XT has a practical feature which increases airflow significantly. It does this by having the center fan rotate in a different direction to the outside fans, this reduces turbulence hence increasing airflow. It also has a stylish backplate which increases the durability of the graphics card. As for the outputs it has – 2xHDMI & 2xDisplayPort Ports.

The RX 5700XT is a great affordable graphics card for gaming at 1440P, and it is in direct competition with the RTX 2070 SUPER. Like all the RTX cards, the 2070 SUPER comes equipped with ray tracing and DLSS support, the RX 5700XT does not come equipped with such technology.

However, the RX 5700XT will often beat the RTX 2070 SUPER in a lot of gaming scenarios, and a lot of gamers prefer the raw performance over ray tracing which can severely diminish the gaming performance.

Gaming at 4K is a little more expensive than 1440P because it requires more powerful hardware. It is also the least popular option in competitive scenarios because it reduces framerates significantly however, if you’re a casual gamer, 4K is definitely worth it for the amazing graphics.

The RTX 3080 is a beast of a graphics card with almost double the performance of the RTX 2080 at a fairly decent price, MSRP ($699). It is also far more powerful than the RTX 2080 TI & and it has enough VRAM to support higher resolutions. 10GB of fast GDDR6X VRAM should suffice.

It has 8704 Cuda cores almost twice of the RTX 2080 TI clocked at 1440MHz base and 1710 MHz boost and the GPU is based on the new Ampere architecture which offers significant raytracing improvements over the previous architecture. You should be able to activate raytracing at 4K and still have a decent gaming experience.

It’s worth noting that this is an exceedingly power hungry graphics card and it’s recommended that you upgrade your PSU before purchasing this GPU. At minimum, a 750W unit is recommended.

The RTX 3080 features a unique way of delivering power to the GPU, it uses a 12pin power connector which GPUs don’t usually use, just ensure that your power supply comes with enough of these 12pin cables. As for the ports, it has 1xHDMI & 3xDisplayPort Ports.

The RTX 3080 is a top-tier graphics card and it is NVIDIAS leading graphics card in terms of gaming performance. If you’re able to find an RTX 3080, you’ll find that it outperforms the RTX 2080TI by a lot, it is as great graphics card if you’re not looking to leave any performance on the table.