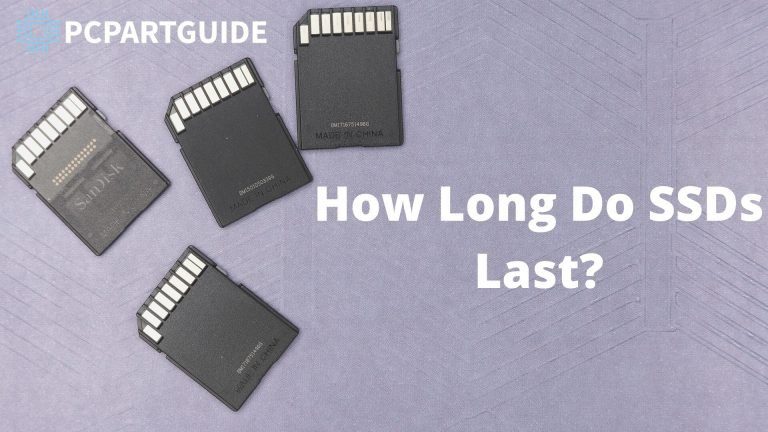 SSDs are known for their fast read and write times, but how long do they last, and are they more durable than HDDs? Before we discuss how long SSDs last, it’s a great idea to get a general understanding of what an SSD is and how they store data.

What Is An SSD & How Long Do They Last?

SSDs or Solid State Drives are a type of non-volatile storage device used in computers. They have fast read and write times compared to hard drives and this is because they use flash-based memory instead of the traditional mechanical means of reading and writing data.

SSDs have a limited lifespan due to the nature of how they store data. Currently, SSDs last about 10 years, this is because NAND-based SSDs have a limit to how many times data can be erased from them.

SSDs have come a long way in 5 years using better technology to store more data and increase the read/write efficiency. The larger the capacity of the SSD, the longer the lifespan is,

Essentially, they use chips to store data instead of mechanical arms and magnetic disks that hard drives use. This means that there are fewer failure points in solid-state drives therefore they’re statistically more durable than hard drives, but how long do they actually last?

How Durable Are SSDs?

SSDs may be faster and more durable than HDDs, but nothing is perfect. SSDs have their own issues such as having a limited amount of times data can be erased from it, and getting slower when more data is added. However, this shouldn’t discourage you from using SSDs as they’re still useful.

SSDs Have An Overwrite Limit

NAND sectors have an erase limit, this is due to the way NAND flash memory works. So every time data is erased from a memory cell, a small amount of damage is dealt to the cell. The limited write endurance is due to the fact that NAND drives must erase the data currently inside the block before writing new data to it.

Another metric used is Terabytes Written (TBW) and its a rating for how much data can be written to it over the lifetime of the drive. Around 400TBW is the minimum you can expect from a NAND SSD drive. If your drive is rated for 500TBW, that means you may need to replace the drive after writing 500 Terabytes of data to it.

You shouldn’t worry about your SSDs write limit as the write limits are extremely high, and manufacturers give conservative ratings. So you can expect your SSD to last longer than expected, although this isn’t 100% guaranteed. If you have a 1TB SSD and the warranty is 5 years then you’ll have to write 1TB to that SSD everyday for 5 years to expect it to fail.

Do SSDs Get Slower When Full?

The more data SSDs have stored, the slower the SSD will perform, so larger SSDs actually perform faster than smaller SSDs. The more you fill up the SSD, the capability to write to the drive decreases, this is due to how NAND flash drives work.

The reason SSDs slow down as you fill them up is because there are more “partially filled blocks”. This means the SSD will have to overwrite blocks which significantly reduce the performance of the SSD. SSDs usually default to writing to empty blocks which your operating system should already take care of.

With the latest operating systems, It should come with the TRIM feature which commands the hard drive to make empty blocks where data was once stored, however this becomes harder once the drive is nearly full.

You shouldn’t fill up your SSD because of the performance hit you will take. You should aim to only use up to 75% of the drives total capacity. Always save space for the read/write performance as you can suffer from a dramatic loss of performance.

The act of filling your SSD to full capacity could reduce the lifespan as overwriting data more often degrades the cells which are storing electrical charges.

Are SSDs Affected By Magnets?

The data on SSDs are not affected by magnets, this is because they do not store data magnetically. SSDs use NAND chips to store data, these NAND chips are made up of floating-point transistors which store their data as electrical charges instead of magnetic charges.

Hard drives on the other hand will store data magnetically, this means there is a possibility that a magnet could affect the data on a hard drive. Either way, it’s a good idea to keep powerful magnets away from your computer.

Will Defragging An SSD Make It Last Longer?

If the data on the drive is fragmented, then the read/write head will have to search longer to find the fragmented data. As for SSDs, they store data as electrical charges instead of magnetic charges therefore the data can not be fragmented.

Defragging an wont make your SSD last longer and it will not improve the performance of the drive. Defragging an SSD can use up read/write cycles so ironically, defragging an SSD will reduce its lifespan. The act of defragging a drive makes sense for HDDs as the data on the magnetic disk an become fragmented.

SSDs do not need cooling however it’s a good idea to have sufficient cooling within your case so your SSD can receive cooling passively. A very hot SSD brings nothing but negatives, hot hardware suffer from a reduced lifespan and performance as the components soften and expand.

In conclusion, SSDs are quite durable and they can last a long time if used correctly. The do indeed have a limited amount of times data can be written to it, but that shouldn’t discourage you from using them. Purposely using up read/write cycles will reduce the lifespan, so if you use the SSD normally, it should last for around 10 years.