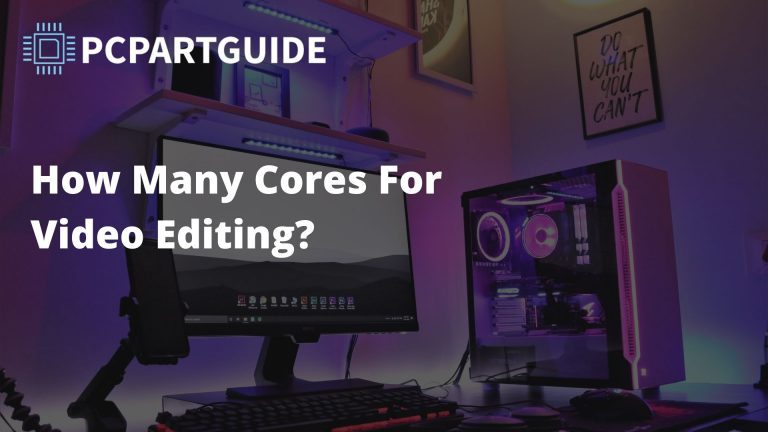 A computer’s processor consists of many metrics to measure its performance, the most popular are the clock speed, the core count, and the IPC. Nowadays, processors consist of multiple cores, these cores are physical and you can see them on the CPU die. A CPU that is clocked at 5GHz will have all its cores cycling 5billion times per second(5GHz), so more cores and higher clock speed equals more performance.

How Many Cores Is Best For Video Editing?

It all comes down to what resolution your video editing at, for example, the higher resolution is, the more processing power you will need. This is because higher resolutions tend to move around more data that needs processing, this is why it’s harder to video edit at 4K compared to 1080P. If you want an all-around decent video editing CPU, the Ryzen 7 5800x would be an amazing option for 1080P and 4K due to its amazing multi-core performance.

Video editing at 4K can be quite tough, the resolution is 4 times larger than 1080P, so it requires a lot more processing power to streamline the encoding process. For 4K video editing, the Ryzen 9 5900x would be an amazing option, Ryzen is a great provider for content creation and they provide many cores for multithreaded tasks, The Ryzen 9 5900x comes with 12 cores and 24 threads which is more than enough for 4K Video editing.

For 1080P video editing, you won’t require as much processing power due to it being a much smaller resolution compared to 4K. The encoding processor should be much quicker even with a weaker processor, so we’re going to recommend the I5 12400 as it comes with 6 cores, 12 threads, and a decent iGPU with amazing encoding decoding capabilities. This will be perfect for beginner video editors as it won’t break the bank, and it can be perfect if you’re into YouTube.

Intel Vs Ryzen For Video Editing

As we know at the moment, video editing benefits from having more cores, so if you can easily pick up a processor that has plenty of cores for an affordable price, that can be a great deal for video editing. Ryzen or AMD processors are known to provide decent multi-core processors at an affordable price, so they can be the best option for you if you’re not trying to go overkill.

Intel on the other hand tends to focus more on the single-core perspective when it comes to the processor’s performance, but they do have some amazing chips that are great at multi-core performance. The thing with Intel, is they tend to be quite expensive and reserved for the users that really want a strong processor, so if you want the best of the best, you can pick up one of the latest I9 chips from Intel.

If you’re going the Intel route for video editing, you may be able to capture a huge benefit going with certain CPUs. Intel CPUs with iGPUs have a huge advantage when it comes to video editing, so make sure you do not pick up intel CPUs without iGPUs. Performance can be up to 40% better with an iGPU compared to an equivalent CPU without an iGPU, this is due to the iGPU having great encoders and decoders inside them. So make sure you do not leave this huge performance bonus on the table.

For video editing, the i5s tend to be the weakest option, but they’re definitely capable of video editing at lower resolutions such as 1080P. The i5s tend to have fewer cores than the i7 and the i9 counterparts which means they lack the multicore performance and we all know that video editing utilizes as many cores as possible. With the recent i5 releases, they’ve been granted access to hyperthreading which is great for video editing, so this can be a great budget option.

The i7 processors are the more powerful counterpart to the i5s, they feature more cores and higher clock speeds, which will obviously translate into better video editing performance. i7s can feature up to 12 processing cores and 20 threads which is great for 4K video editing. If you’re getting serious about video editing, but aren’t quite willing to dive deep, then the i7 is a great option for you.

The I9 processors are the top-of-the-line Intel processors, they’re practically as good as an Intel processor can get, so the performance will be superior to an i7s. Intel i9 processors will be an amazing option if you’re a professional looking to video edit at 4K+ they can come with up to 16 cores and 24 threads which are enough to video edit even at 8K. However, it can be quite expensive so this isn’t recommended if you’re not a serious video editor.

The Ryzen 9 processors are the top-of-the-line multi-core beast that leaves no performance on the table. We recommend Ryzen 9 processors to professionals or people looking to make overkill builds, the Ryzen 9 lineup of processors can offer up to 16 cores and 32 threads. This is way more than the I9 12900K can offer which makes this the best video editing processor you can probably find at the moment, but it isn’t exactly affordable for most people.

The verdict is, video editing is a heavily multithreaded task that requires decent processing power to be run effectively. Due to this, you’ll find top-of-the-line video editing builds featuring some of the most powerful processors you can find such as 16 core 32 thread beasts. If you’re the average PC user looking to build their first PC you can still build a capable video editing system for 1080P, you can find capable processors in the Intel i5 and the Ryzen 5 lineup of processors.

Just ensure, when you’re going to video edit, if you’re going the Intel route the processor must have an iGPU as it provides amazing encoding and decoding capabilities. Also, ensure the processor has hyperthreading or other SMT technology as this essentially doubles the number of cores making it far more efficient, this is recommended only for multithreaded tasks.