How To Choose A Graphics Card 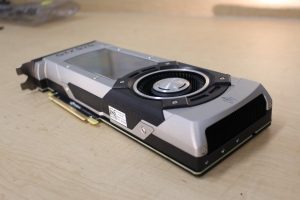 Graphics cards/Video cards/GPU can be difficult to choose from especially from a beginner’s perspective, this is because there are many factors to consider from. It is important to go over the main factors such as the specifications, which manufacturer, bottlenecks, and how much you should spend.

The importance of the graphics card is close next to the CPU. These two hardware devices make the most impact on performance. The GPU and CPU work closely together; then the GPU turns data from the CPU into images.

GPUs have THOUSANDS of cores whereas general CPUs only have a few. The reasoning for this is that GPUs are able to process a small subset of data extremely quickly. The clock speed of these cores operates in the MHz range.

The clock speed your GPU cores operates at is an important factor that shouldn’t be overlooked. There’s a misunderstanding that higher clock speeds = more performance/FPS, the truth is that’s only half the story.

Knowing this could help you make wiser purchases as there are $300 GPUs that outperform $400 GPUs.

If you’re wondering if there’s a performance difference between different brand/Non-Reference GPUs, as long as it’s the same GPU underneath, they will perform identically to each other. For example, an MSI RTX 2080 will perform just like an ASUS RTX 2080.

Non-reference Graphics Cards are cards manufactured by NVIDIA or AMD partners such as ASUS, MSI, GIGABYTE, Zotac, and they’re usually worth waiting for over the original reference cards. This is because non-reference graphics cards usually come with superior coolers, and are sometimes factory overclocked.

What Is Graphics Card RAM/Memory?

If you didn’t know already, graphics cards actually have onboard memory which goes by the name of Video RAM(VRAM). The graphics card memory is responsible for storing and rendering each pixel you see on the screen. Specifically, the VRAM will be storing data such as geometry, texture, and terrain data.

The type of memory used by graphics cards is GDDR which stands for (Graphics double data rate). GDDR has similarities to DDR, but GDDR is built for higher bandwidth due to its wider memory bus.

You’re probably wondering how much VRAM do I need, well that mostly depends on the resolution you’re processing data at. More VRAM usually means the GPU can process higher resolutions easier.

Graphics cards are one of the most power-hungry hardware devices in your system, so you must ensure that your power supply has enough juice to spare. Nowadays, graphics cards will use between 100-300Watts of power.

You can check the power consumption of your GPU by checking the specifications, it will usually tell you the minimum wattage recommended. With that being said, make sure your power supply unit it good enough to power your GPU. For example, if your GPU consumes 250W, a 600W PSU would be good enough.

The design is an aspect that shouldn’t be overlooked when it comes to graphics cards. The design of the graphics card covers features such as size and clearance, reference vs aftermarket cooling, and outputs & connectors.

When it comes to aesthetics, it’ll make or break a system depending on how important it is to you. Many tend to prioritize aesthetics as they’re going for a flashy/niche type build, where others prioritize the specification/performance side of things more.

Reference GPU cards are graphics cards straight from the manufacturer (AMD or NVIDIA), it has the standard cooler, usually a blower cooler. They basically have stock everything, stock cooler, stock specs, stock design.

Non-reference GPUs are graphics cards made partners of AMD and NVIDIA. Although they have the same chip underneath, they come with better coolers and some are pre-overclocked out of the box.

Reference GPUs are good as they’re the original design of the GPU made by the manufacturer. Since everything is stock, it comes with excellent stability also, you have the stock PCB which means installing aftermarket coolers and custom water cooling loops are much easier.

Non-reference graphics cards out of the box are better than reference GPUs since they’re equipped with advanced coolers, and they sometimes come pre-overclocked. On top of that, they’re relatively cheaper.

Making sure you have enough case clearance can save you from a lot of time. Doing this is basically ensuring that your graphics card of choice can physically fit in the case you’re using.

Full and mid ATX cases rarely suffer from this issue however it would be smart to ensure that your graphics card has enough clearance. The issue of clearance usually happens with micro and mini ITX cases.

The specifications of the graphics card and the PC case can be found on their website or spec sheet respectively.

You’re probably wondering, where do I insert my GPU and, how do I power it? Well, all dedicated graphics cards are inserted into PCIe slots, and you’re most likely going to use the PCIe 16x for the extra bandwidth.

Most decent power supplies from recent times should come with all the necessary cables to power your GPU. Some older power supplies may lack certain cables.

Your graphics card is going to output the data it is fed via the many video outputs it has. The most popular video outputs modern graphics cards come with are HDMI, DVI, DisplayPort, and VGA. Don’t always expect VGA ports, it is old and some GPUs do not support them anymore.

Since you’re most likely going to use a monitor, DisplayPort or HDMI are your best output sources since they are relatively new, and provide the best video and audio output. DVI is still relevant, but it doesn’t provide any audio, and resolutions are low.

The AMD Vs NVIDIA war never ceases to exist, this is because they are two massive competitors in the graphics card market. They both have their strengths and weaknesses, and there are compelling reasons to go for either one of them.

It is often said that AMD is for the budget users who want an affordable GPU, and NVIDIA is for the high-end users that want the most performance. Let’s test this statement and see how true it is.

The cheapest option isn’t as clear as it was back in the day, it used to be NVIDIA producing the pricier cards, and AMD producing the affordable option. However, things have changed and since competition is fierce, it seems that NVIDIA is now providing more affordable cards.

A good way to look at this is to take a look at the price to performance ratio of the latest graphics cards. Whilst AMD still dominates the top spot with the Radeon RX 570, NVIDIA has a few amazing budget cards such as the GTX 1650 SUPER, and the GTX 1660.

Always check the MSRP of a graphics card to make sure you’re getting a good deal.

What’s The Most Powerful Option?

As for the most powerful option, NVIDIA still dominates with their most powerful cards being the RTX 2080 TI and the TITAN RTX. These cards do not come cheaply ranging between $1-2K, but that’s the price you pay for the best performance on the market whether it’ll be for gaming or video editing at 4K.

This doesn’t mean AMD doesn’t provide us with some powerful GPUs, the Radeon VII is more than capable at doing whatever job you want it to do, and so is the Radeon RX 5700 which is not far behind.

How To Choose A GPU For Gaming

Many people believe that you need a powerful GPU to play games effectively, this is only true when you’re gaming at high resolutions (4K & 8K) with all the graphics settings cranked to the max. This is especially true when you’re playing demanding games.

What Games Do You Play?

There are different types of games, and not all of them demand the latest GPU to run for example, CSGO. CSGO can do find with a low-mid tier GPU, even at 1440P(2K). If you decide you’re going to play games such as Battlefield, you will most likely need a decent mid-top tier GPU to run it smoothly.

In fact, you can check games minimum hardware specifications to see what kind of game you’re dealing with and if your hardware is sufficient enough. Or if that’s not enough, there are youtube videos showing how a game will run with a specific GPU, not very hard to find these videos.

What Type Of Screen Are You Using

Important monitor/screen factors to consider are the refresh rate and the resolution. The best thing you can do before you buy a graphics card is to match your screens resolution. The most common resolutions nowadays are 1080P,2K, and 4K.

The refresh rate of a monitor is the number of times your monitor updates the screen a second. A 144hz monitor will update 144 times a second. This also correlates to the number of frames a screen can display per second. A 60hz screen will only show 60 frames per second no matter how much frames you’re generating.

Are Graphics Cards Necessary For Streaming?

The graphics card isn’t necessary for streaming, but some graphical processing power is necessary. You may find a graphics card being used in a dedicated streaming PC, this is for processing overlays, scaling resolutions, and anti-aliasing. Otherwise, you’ll find an Intel CPU with integrated graphics.

Is SLI/Multiple GPUs Worth it For Gaming

The thought of having multiple GPUs in one system sounds amazing, 2 GPUs = Double the FPS, right? SLI does definitely increase the performance, but it isn’t quite double. You can expect around a 50% performance increase.

Before you get into the SLI hype, there are a few things you need to know. SLI requires identical GPUs, there are no mix and matching, only in extreme cases, this works. And not every game is SLI optimized, some games don’t even acknowledge a second GPU.

SLI is one of those things which should be used in very extreme cases, the ordinary gamer probably has no business messing with SLI.

SLI doesn’t make sense when you’re gaming at modest resolutions such as 1080P & 1440P. There are many single GPUs that can handle these resolutions with ease.

What Is Raytracing & Is It Worth It?

Raytracing is a new graphical advancement that has got people wondering if they need an RTX card to play games for the future. It offers beautiful realistic lighting effects thanks to their all-new Turing cores.

While it’s nice to have RTX, it is still in its infant stages, and not many games have RTX implemented. Perhaps we can see a rise in popularity in the next few years but for now, RTX isn’t all that necessary.

How To Choose A GPU For Video Editing

When it comes to video editing, the video card is actually the least important component since the CPU does most of the heavy lifting. This doesn’t mean the GPU is irrelevant, some software actually requires a decent GPU to work effectively.

What Software Do You Use?

Some video editing software out there does not really require a powerful GPU but there are some exceptions, DaVinci Resolve offloads intensive image processing onto the GPU and there is no way around it.

If your video editing software requires a GPU, a mid-top tier GPU is definitely necessary. Also, when purchasing a video editing GPU, it is wiser to go with NVIDIA for the Cuda core benefits such as Cuda Acceleration. Unfortunately, AMD does not have this to offer, that’s why most video editing machines utilize NVIDIA cards.