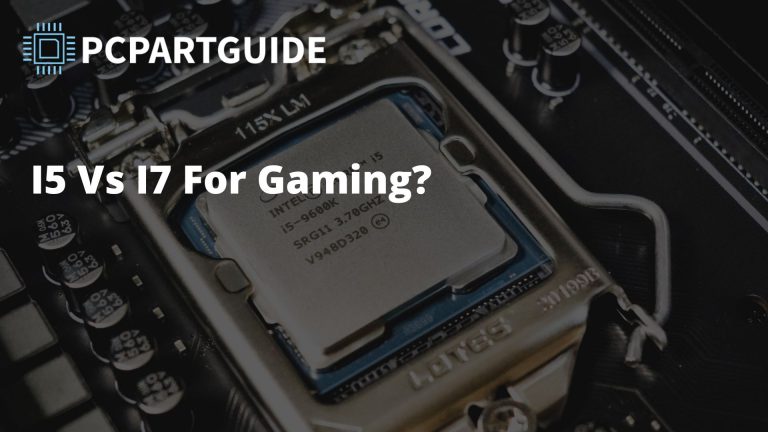 The I5 Vs I7 comparison is one of the most popular comparisons especially among gamers, this is because I5s and I7s hold a lot of similarities.

So, a gamer will usually have a difficult choice choosing between I5 and I7 processors, but hopefully we can cover the key differences, and help you make the right choice.

Primarily for gaming, the I5 is usually the better choice, this is because I5s are great at single-core performance, but lack at multicore performance in comparison to I7s.

I5 Vs I7 For Gaming – Key Differences

I5 and I7 processors are both families of Intel processors, the other families are the I3 and the I9 processors.

So, many people will pick I7s if they’re performing heavy tasks such as video editing, music production, or photo editing.

Why I5s Are Good For Games

Because of this, it makes it an attractive deal for strictly gaming only PCs which have no intention of running multithreaded intensive tasks.

Take a look at the Alder Lake processors, the I5 12600K has similar clock speeds to the I7 12700K which is the most important metric for gaming.

Keeping it specific to the newer generation of I5s such as the 11th, 12th, and 13th gen chips, then yes, I5s are excellent chips.

The older I5s will lack the single-core performance, and many of them lack critical features such as hyperthreading which massively improve multicore performance.

Also Read: Is I5 Good For Gaming

Why I7s Are Good For Games

This makes I7s a great choice for gamers that want to do a little more than just gaming, such as streaming, or video editing.

So, you can see I7s as an I5 with a little more multi-core performance, but that will definitely come at a higher price tag.

I7s have always been amazing for gaming, the 10th, 11th, 12th, and 13th gen I7s are all amazing chips thanks to their single-core performance, and multicore performance.

I7s always had hyperthreading technology whereas I5s recently got such technology with the release of the 10th gen chips (I5 10600K).

How Many Cores Do You Need For Gaming?

Cores are a crucial component for a processor, they have a major impact on how applications perform including gaming.

We recommend at least 6 cores for a great gaming experience, but more cores such as 8 would be advantageous if you’re looking to stream/video edit on the side.

The thing is that cores aren’t truly conducive to a good gaming PC, they’re merely an added bonus that aids in multitasking, and some game logic.

Some games are able to use multiple cores, but single-core performance is by far the most important metric.

If cores were important, we’d see more gaming PCs using high core count CPUs, so this is why I5s are great for gaming, they have pretty much top-tier single-core performance.

I5 Vs I7 – What Is Single Core Performance?

The first metric is clock speed, this is going to be advertised right on the box when you pick up either an I5 or an I7.

Clock speed defines how many times the cores located on the CPU’s die will cycle or clock per second. A clock speed of 5.6GHz means the CPU will cycle 5.6 billion times a second.

The second metric is a little hidden and mysterious because it’s not publicly advertised, but it’s called IPC.

IPC defines how much work a CPU can do per clock cycle, a higher IPC value is definitely better.

IPC is improved with each CPU generation, so 12th gen Intel has a higher IPC value than 11th gen intel.

I5 Vs I7 – So What Has Better Single Core Performance?

When comparing the I5 and the I7s single core performance, they’re pretty much neck and neck with the I7 usually being marginally faster.

And the IPC values between the 12600K and the I7 12700K are identical because we’re keeping it to the exact same generation and architecture (12th gen).

So we’d say that the I5 and the I7 have identical single-core performance meaning the gaming performance between the two chips are the same.

I5 Vs I7 For Gaming Benchmarks

Benchmarks are an easy way to get a visual representation of how well processors work in relation to each other.

So, take a look below at the I5 versus the I7 in a gaming environment, and make your own opinion on what’s better.

Across 3 different games, the I7 wins in terms of gaming performance with an average of 7 FPS more.

You should always consider what you intend on doing with the gaming PC you’re going to build, whilst the I5 and the I7 perform very well, they both excel at different tasks.

For a pure gaming PC, it would be a bad idea to pick an I7 purely because it’s a bad deal, the I5 can do the job just as well.

But if you intend on video editing on the side, and using tasks that benefit from multithreading, then the I7 can be a great option.

In conclusion, the I5 is the better option for a pure gaming PC because it can do everything the I7 can do in a gaming scenario for a cheaper price tag.

But the I7 is definitely a great processor for gaming, it’s just better suited in a multipurpose environment where you’re going to be performing CPU intensive tasks.