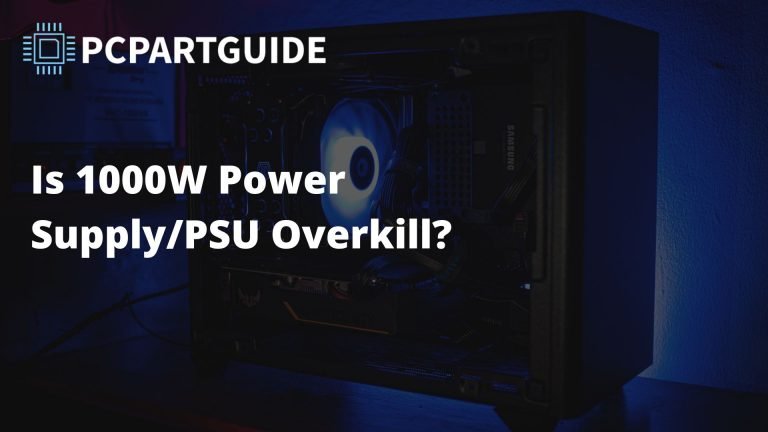 So why would anyone ever need an 1000W unit, well it seems that there will be a use for them after all.

Considering the trend of power consumption with graphics cards and other components, it seems that a 1000W power supply is becoming the norm.

Is 1000W Overkill For A Power Supply?

The power draw of components nowadays is huge, especially with graphics cards, so we don’t believe 1000W is overkill.

Yeah that’s right, it mostly comes down to your specifications, and use for your PC, so to some users, yes 1000W is absolutely overkill.

For gaming PC’s you will often find a graphics card, and graphics cards are known for consuming a huge amount of power.

This is evident with the RTX 30 series cards, and the up and coming RTX 40 series cards which look like they will be consuming even more power.

So for a gaming PC, you may find yourself needing at least 1000W of power, but take a look at the table down below for help.

So what we can see from the table above is that the top end graphics cards need at least a 1000W power supply.

So if you’re building a top of the range gaming PC, then yes, a 1000W power supply is necessary, and not considered overkill.

But if you’re building a mid-top tier gaming PC, then 1000W may be considered overkill, you may be able to do just fine with 750W.

Is 1000W Overkill For Video Editing?

For video editing, it heavily relies on the CPU, but the GPU is increasing in prominence, so you should watch out.

Due to the nature of video editing, we don’t believe you need a 1000W power supply, this is because CPUs are not as power hungry as graphics cards, let’s look at the table down below.

We can see that the CPU doesn’t consume nearly as much power as the GPU does, the recommended power supplies peak at around 700W.

But that doesn’t mean that CPUs aren’t becoming increasingly more power hungry as the generations go on.

As the clock speed increases, so will the power consumption, so you can only expect CPUs to become even more power hungry.

This is why overclocking dramatically increases the power consumption, even if you do not increase the core voltages.

What Increases A Computer’s Power Requirements?

Every single component in your computer will consume some level of power, so that includes drives, fans, peripherals, CPU, and GPU.

CPUs will consume a considerable amount of power, but not as much as a graphics card would.

Components such as RAM, SSDs, HDDs, CPU coolers, and the Motherboard will all consume power, but it’s pretty much negligible, you should focus more on the CPU and the GPU.

Is Having An Overkill Power Supply Bad?

If your PC build doesn’t need a 1000W power supply, the only negative thing that would come out of it is that you probably could’ve saved some money.

Otherwise, having an overkill power supply doesn’t affect your computer in any way, and it can serve as a benefit if you intend on upgrading the components in the future.

Your computer will only pull what it needs, it will never pull the full 1000W if the components don’t need it, this can fry your components.

So there’s no need to worry about having an overkill power supply damaging your expensive CPU or GPU.

If you’re interested in picking up a 1000W power supply, then there’s a few brands to look out for.

Corsair is a reputable brand in the power supply market, they release some awesome units such as the Corsair HX1000, and the Corsair RM1000x

EVGA also sells some great quality power supplies, they have the famous SuperNOVA PSUs which are popular among gamers.

Seasonic is one of the major power supply brands, most units you buy from Seasonic will be good, you don’t have to worry about getting anything bad from them.

SuperFlower Superflower is among the highest rated OEM/Power supply manufacturers out there. They take extreme pride in their quality, and offer extremely long warranties.

So, 1000W Is Great For Future-Proofing

Looking to be prepared for the RTX 40 series, and RX 7000 series graphics cards? Then 1000W should suffice for most individuals.

The mid tier cards shouldn’t require a 1000W power supply, so in a way, the 1000W PSU should have you future-proofed for the mid-tiered cards.

And, it should provide you enough power to add additional PCIE components such as WIFI and sound cards.

In conclusion, we don’t believe that 1000W power supplies are overkill, this is because they’re becoming more and more viable as components consume more and more power.

But, not everyone will need an 1000W power supply, mid range gamers and video editors can do fine with 700-750W power supplies.