Mini-ITX/SFF(Small Form Factor) builds are one of the most compact builds & they offer a ton of benefits over the traditional Mid-Full tower ATX Builds. One of the main benefits of Mini-ITX builds is the compactness they offer also, they’re much more portable which is a benefit if you’re moving a lot.

This build is meant to serve as a budget option for gamers looking for a SFF(Small Form Factor) build. Even though SFF builds are generally more expensive compared to their regular ATX counterparts, this build will still be fairly affordable. It is recommended you use this build to game at 1080P since the hardware being used produces the best results at 1080P.

The CPU of choice is budget but it definitely packs a solid punch. It is seen as a multi-purpose processor being great at processing multi-threaded and single-core applications. For gaming, you don’t need to worry, this processor has enough power to game at 1080P and higher. For our cooling solution, we’re sticking with the stock Wraith cooler since it’s free and it is actually a really good cooler despite being a stock one. Most importantly, the cooler has enough clearance in the Mini ITX case we are using.

The motherboard we’re using is mid-top tier & it offers WIFI which further enhances the purpose of an SFF build. If you’re a person that moves a lot, the WIFI will come in handy. Also, in terms of VRM, it is enough for basic CPU usage. For the RAM, we’re going with G.SKILL since they’re very reputable & the RAM modules we’re using are quite fast which AMD processors love a lot. Also, it has RGB which can make your build look much cooler if done right.

For storage, we’re going with a top-tier NVME M.2 drive which is the Samsung 970 EVO 1TB. You have a large SSD storage device to store all your games and your OS. Once you’ve experienced fast loading times across the board, you’ll never want to go back to mechanical HDDs. The graphics card of choice is the RX 5600 XT & it’s a fairly recent graphics card which has been marketed as being the best graphics card for 1080P

Now for the fun part of the build. The NZXT H210i is the case we’re using & it’s one of the best Mini-ITX cases you can find on the market. It’s super easy to build in & it’s extremely aesthetically pleasing. When it comes to power supplies, Super Flower are one of the most reputable OEMs, they’re known for making high-quality PSU’s. The PSU we’re using is a 550W 80+ Gold unit & it’s just enough for our system.

Here is one of the best 1080P monitors you can buy, this is recommended because it is a 144Hz monitor that supports Freesync which the AMD GPU we’re using benefits from. The 5600XT will be able to achieve up to 144FPS in most games, especially in games such as CSGO where you gain an advantage over certain players.

This build serves as a top-tier 1440P option for gamers wanting to push their SFF building capabilities to the limits. Also, we wanted the build to be as portable as possible, so the case of choice has a handle which makes moving the PC much easier. The build is not focused on aesthetics as much as the previous build, but you do have some options in terms of RGB.

Our CPU of choice comes from Intel’s new 10th generation line of processors. The I7 10700K is slightly more powerful than the I9 9900K so that means the single-core performance is slightly higher. You’ll see a few more frames on average compared to the 9900K. The CPU cooler of choice is the beefy Noctua NH-D15 which is actually able to fit in this case surprisingly.

The motherboard we’re using is the Asrock Z490 Phantom Gaming which will house the 10700K. It uses a 9 power phase design which is more than enough to support the 10700K & some overclocking if you’re into that. The RAM is the G.SKILL TRIDENT RGB which is meant to add personality to your build VIA RGB whilst being high performing.

Our storage device is the Samsung 970 EVO, we really don’t want to store our OS or games on a hard drive. Gaming off an SSD offers loading times much much quicker than a HDD would. The GPU we’re going to be gaming with is the 2070 SUPER mini variant which fits nicely in the Mini-ITX case. It has the exact same specs as the standard 2070 SUPER in a smaller package.

For the case, we’re using the Lian Li TU150 case which is super compact and it handles airflow better than most MINI-ITX cases. Also, the side panel is great for showing off some hardware and lighting, the RAM and GPU come with RGB. For the power supply, we’re using an SFX unit which this case recommends us to use. The good thing about SFX power supplies is that the cables are shorter which is a benefit for compact cable management.

The recommended monitor is a 27inch 1440P GSYNC monitor which will offer minimal stutters for your NVIDIA graphics card. The native refresh rate is 144Hz which can be overclocked to 165Hz within the monitor’s settings. If the game you’re playing can do with the extra smoothness, then i’d say overclock it. For 144/165Hz, you must use DisplayPort since HDMI does not support this.

The processor of choice is the recently released Ryzen 9 3900XT which is slightly faster in terms of clock speed with the same TDP and Price. So it makes perfect sense to go with the 3900XT over the 3900X. For the CPU cooler, we’re going with Noctua because they keep things quiet whilst maintaining great thermals. The NH-U12A is a low profile CPU cooler that will fit into the case we’re using.

The motherboard of choice is a mid-top range board which will house the 3900XT. The power solution they use is a 8+2 power phase which is perfect for multi-core processors such as the 3900XT. Since the build is meant to be overkill, we opted for 2x16GB RGB 3200MHz RAM sticks, for gaming, this is more than enough.

For storage, the Corsair MP600 is slightly faster than the Samsung 970 EVO PLUS when it comes to gaming. This is a PCIE GEN 4 M.2 drive which offers Sequential Read Speeds of Up to 4,950 MB/s and Write Speeds of Up to 4,250 MB/s. This is significantly faster than the 970 EVO PLUS. For the ultimate gaming experience, we’ve selected the 2080 SUPER; when used at 1440P it is overkill so it seems that 4K is a more reasonable resolution for this card.

The case we’re using is the extremely compact InWin A1 Plus, but don’t worry, all the hardware is compatible with this case, it’s just going to be a struggle to get it to fit. For the PSU, you can stick with the power supply that comes with the case to save money plus it has more wattage, but the recommended PSU is the Corsair SF Series 600W. The power supply is the most crucial component and it must be great quality especially if your build is expensive, that’s why the Corsair SF 600W has been recommended.

The Acer Predator monitor we’re recommending is a great GSYNC 4K, 32″, IPS gaming monitor that isn’t too expensive. Image quality wise, it is great, the colors are vivid and bright, but the refresh rate has a maximum of 60Hz. Since it is hard to achieve 144Hz at 4K anyways, this is barely a negative. 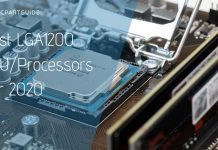