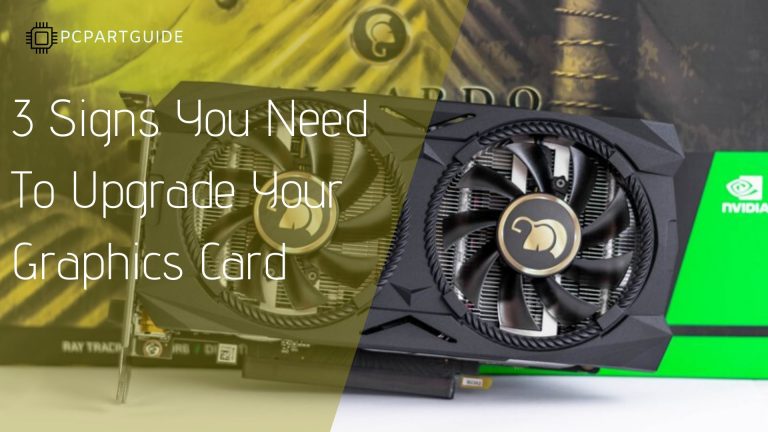 The signs telling you when you should upgrade your graphics card can be subtle. You may not notice that the games you’re playing are starting to become unplayable with continuous graphical advancements. Or you miss the signs that your graphics card is failing.

There’s nothing worse than witnessing your graphics card struggle to run a game at decent settings. You could’ve purchased a graphics card that played games well back in the day, but now you can barely run the newest games and you have to severely lower the settings.

One big problem in the PC gaming community is that many gamers believe they need to be able to play every single game at max settings and max resolution or else their PC is out of date. It is unrealistic to expect this since many games released can be unoptimized upon early release.

You should value frame rate over the graphical fidelity because it’s the frames per second that make a game playable or unplayable. If you’re finding that you cannot run a game at a decent frame rate no matter how much you play with the settings, then you need a GPU upgrade.

2. Your graphics card is showing signs of failure

A sign of GPU failure can be extremely subtle at the beginning, and there are different ways GPU failure can manifest. The most obvious sign is your game or PC crashes when loading or playing a game. If this happens, your motherboard should detect and display an error code.

A subtle sign when playing a game is graphical glitches/artifacts, they are visual anomalies generated by the GPU and they can be quite annoying. Artifacts are caused mostly by – Overheating Chip, Dying GPU Core, bad VRAM, or a poor OC. Check the overclock on the GPU and tune it down a bit if the artifacts are caused by a bad overclock. Otherwise, the GPU may be on its last legs and you may need a replacement.

3. The GPU Is Bottlenecking Your CPU

A GPU bottleneck occurs when the GPU limits the processor. Now every PC has a bottleneck; if no PC had a bottleneck, then it would have nothing limiting it, therefore unlimited power. But the problem arises when the GPU massively bottlenecks the CPU, it’s like pairing an I9 9900k with an Nvidia gt 710.

In detail, a GPU bottleneck means the processor is handling more frames than the GPU can even handle, this results in an overwhelmed GPU, and this is the rarest types of bottlenecks. More often you’ll experience a CPU bottleneck, this is when the CPU is limiting the GPU.

What to do when you experience a GPU bottleneck? Well, you should consider creating a CPU/GPU equilibrium where the bottleneck percentage is pretty low. You can find decent CPU/GPU combinations in this post. It shows you the best combination for the most popular resolutions being 1080P,1440P, & 4K.

What Is The Best Etiquette When Upgrading A GPU?

Before you upgrade your graphics card, there are a few things you need to consider. Knowing the following factors can prevent headaches and annoyance.

How Often Should I Upgrade My GPU?

Depending on what you want out of your GPU, it can last anywhere between 1-3 Graphics card generations. If you’re more of a graphical guy, then your GPU will last less time. If you value playability, for example, having a decent framerate, then your GPU should last longer. There are graphics cards released 5 years ago that can run the latest games at decent frame rates, but the catch is, you have to play with the settings to get a decent frame rate.

How Powerful Should My Next Upgrade Be?

Make Sure The Card Fits Into Your Case

Graphics cards are getting larger and larger due to the beefier chips requiring a more robust cooling solution. Your PC case should say within its specification it’s maximum GPU height and width. All you need to do is ensure the graphics cards length and width fit within the case specification and you’re good to go.

Make Sure The PSU Can Provide It Enough Power

Under-powering your GPU will have some unpleasant consequences; consequences such as lowered graphical quality, an under-performing GPU, frequent crashes, and BSODS. You can even risk overdrawing your PSU, as a result, damaging it. The best rule of thumb when buying a graphics card is to look at the recommended wattage it’s asking for, a GPU that asks for 250W requires at least a 600W power supply.

Know what side you’re going with and what they have to offer – Team Red Or Team Green? These guys both have their pros and cons, no side is better than the other, but it’s worth noting the differences.

Team Red/AMD are noticeably priced friendly, because of this, you’re able to pick up graphics cards that offer the best bang for your buck. The RX 5700 XT is a great example of such a card.

Team Green/NVIDIA offers powerful graphics cards such as the 2080 TI. These graphics cards are ahead of the graphical development, but they usually come at a hefty price tag.

The goal is to upgrade your graphics card when you realise it can no longer play the games you want to the standards you like.

Pretty much, if you’re not getting the FPS you need, this can mess with playability, and the immersiveness, this is a great sign you need to upgrade.

But, upgrading is necessary when your graphics card is failing, this can be evident when the GPU starts to artefact which is a sign of the VRMs failing.