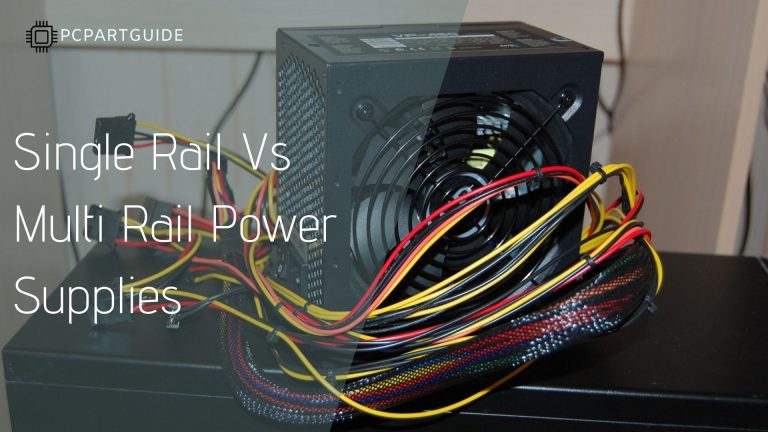 There’s a long debate regarding whether single or multi-rail power supplies are better & the truth is quite boring. Because there are many assumptions such as “Multiple Rails provide more stable voltages”, this article is needed to clear up any misconceptions about one being better than the other.

What Is A Power Supply Rail?

You can often find the +12V rail split into multiple rails which divides the current(amperes) between them, which is seen as a safety feature. This is what multiple rails are at their essence, a safety mechanism made to prevent things from melting and or setting things on fire via Over Current Protection monitoring.

Single-Rail & Multi-Rail – What Is It?

Single-Rail power supplies will have the entire +12V source controlled on a single circuit, this is by far the most popular design/option for power supplies as it better suits overclocking, and handles higher powered components such as graphics cards slightly better.

Multi-Rail power supplies have a slight difference being slightly better at tripping the Short-Circuit Protection(SCP) and Over-Current Protection(OCP) which means your components have a higher chance of surviving if something was to go wrong.

Well, 99.9% of the time, it does not matter if your power supply is single or multiple rails. Most of the time, SCP (Short Circuit Protection) will kick in before things start melting due to too much current going through a rail.

Now, .1% of the time, if your power supply SCP(Short Circuit Protection) doesn’t kick in, then OCP (Over Current Protection) which monitors the +12V rails via a configured chip should detect too much current going down a cable and shut off the power supply. Usually, this occurs when there’s been damage or the power supply is being used incorrectly.

Power supplies nowadays have so many safety mechanisms that make the debate of single vs multiple rail power supplies fruitless. As specified previously, the SCP is a much more practical feature that prevents most bonfires in your PC.

What Other Safety Mechanisms Do Power Supplies Use?

SCP – Short circuit protection. You’ll find this in almost all power supplies, and it measures the amount of resistance going through the output rails. Usually, it’ll shut down the power supply if there is a resistance of fewer than 0.1 ohms

OPP – Overpower protection activates when the power supply is drawing more power then its rated to handle. Usually, power supplies have a headroom of around 50W.

OCP – Overcurrent protection kicks in & shuts off the PSU when one or more of the power supply rails exceeds its limits in terms of current. This mechanism is the most popular mechanism with power supplies.

OVP/UVP – Overvoltage/Undervoltage protection kicks in when it detects a rail operating over or below its rated voltages.

Why Do People Say Single Rail Units Are Better?

It’s to do with how the rails work, multi-rail power supplies have the OCP set across every single rail they have. For example, a 4x+12V rail power supply with a limit of 20AMPS per rail can seem like a limitation to some individuals running extreme setups.

However, multiple-rail power supplies have their benefits too being more safer for use with mid-high performance systems. In most cases, you will not trigger a trace to shut off your power supply unless you’re running multiple GPUs off a single trace.

It’s likely untrue unless there is another filtering stage included when the rails split. Most power supplies do not have an existing filtering stage to supply cleaner voltages & it’s likely a marketing tactic to push more sales.

Conclusion – Do I Need To Worry?

In normal scenarios, you don’t need to care whether your power supply is single or multi-rail. And if your power supply happens to be a multi-rail unit, unless you’re running multiple graphics cards off the same rail, you don’t need to worry. Also, if your unit is a single-rail PSU you shouldn’t worry about your components catching fire unless you’re doing something unrecommended.