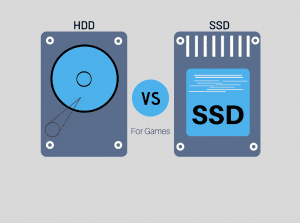 You’ve probably heard many times that SSDs are superior to HDD(Hard drives) when it comes to gaming. But the truth is that they both excel in their own way, and perform better in different circumstances.

Let’s look at the differences between Solid State Drives and Hard Disks, and what you should consider for gaming.

SSD Vs HDD For Storing Games

Video games are getting large, some exceeding 100GBs in size. It happens that hard drives are perfect for storing large video games. Hard drives are cheaper, and they are larger than solid-state drives.

High-end HDDs can reach up to 10TBs, and they’re not as expensive as you think, whereas high-end SSDs reach a maximum of 4TBs.

If you think you’re going to be storing large video games with massive open worlds, then you should definitely pick up a Hard Drive.

Solid State Drives Are Great In The Long Run

In the long run, Solid State Drives will outlive your Hard Drive 9 times out of 10. It is good to store video games on Solid-State Drives from a reliability standpoint.

Plus HDDs degrade over time, their performance will decline whereas SSDs will maintain performance far better than HDDs.

The reliability and performance come from having no moving mechanical parts. It’s all chips. All your data is stored on chips similar to a handy USB stick.

SSDs are superior to HDDs when it comes to loading video games. This speed comes from utilizing chips as a storage device similar to that of a USB stick. Hard Disks use moving mechanical parts to read and write data.

Having a superior read/write speed won’t only benefit you with video games. Everything else will benefit from faster read/write speeds. Other applications will load faster, your operating system will load 2-3x quicker than it would on a hard drive.

Instead of using a mechanical arm to read data, SSDs use a controller as the medium to read/write data. The controller is very important, and it’s what mainly determines the speed of reading & writing.

Additionally, the access times of SSDs are phenomenal, near-instantaneous. On the other hand, HDDs generally take a few milliseconds to access its data.

Anything to do with speed, SSDs will win over HDDs.

What About M.2 SSDs – Are They Good For Gaming?

M.2 SSDs are SSDs but in a different form factor(M.2). They are more expensive than your typical SATA III SSDs. SATA III is an interface that has reached the maximum potential of 600MB/s. NVMe M.2 SSDs do not utilize SATA III, they use NVMe which communicates with PCIe to transfer data.

If you’re looking for M.2 SSDs, keep in mind that some M.2 SSDs utilize SATA III as its interface and not NVME. Just be knowledgeable of which M.2 drives your motherboard supports.

NVMe is indeed faster than SATA III. The NVMe interface peaks at 3500MB/s which is insanely quick. It is the latest storage technology which is being constantly developed.

As for gaming, of course they’re good for gaming. They load games quicker than the well established SATA III SSDs. But they are slightly more pricey than your standard SATA III SSD.

So What Should I Go For, SSD Or HDD?

Honestly, you should pick up both, but as previously stated, they both have their areas where they’re most effective. Here are the best scenarios for each storage device. Have a look at the pros and cons, and figure out which storage device fits your needs the most. You will probably find out that you actually need both storage devices as they go hand and hand together.

You Should Pick Up An SSD Because

Insanely quick load times. Hard drives will not be able to keep up with the loading times of SSDs, especially M.2 NVME SSDs.

They produce literally no noise. There are no moving parts, only chips. There is nothing to produce noise.

All of this sounds good, but remember that you will generally have to pay more for the same capacity as a hard drive. The price per dollar is pretty high, so per GB, you will be paying more.

And they are expensive too, but SSDs have been progressively getting cheaper, so more and more gamers that are looking for decent affordable storage are now picking them up.

You Should Pick Up A HDD Because

Mass storage is much more effective on HDDs. Hard drives can go up to 10TB while the largest SSDs will reach up to 4TB. If you’re a gamer that plays a lot of games, you are most likely downloading the games which can be massive. So these massive hard drives are necessary

It is pretty easy to pick up a HDD and install it. They are cheaper and offer a ton more space than SSDS to suit your needs.

The price per GB is far less than that of an SSD. You can pick up a 2TB HDD for the price of a 500GB SSD.

In case You’re On The Edge About SSDs

To motivate you to at least pick up an SSD, watch this video. The results show just how powerful SSDs are. Nowadays, it’s pretty unusual to not pick up an SSD, they’re just as relevant as HDDs.

A. Unfortunately no, however, games will load insanely fast, your typical hard drive will not keep up.

A. Yes, magnets will erase data, however, this is only true for HDDs. Solid State Drives are not affected by magnets.

Q. Will SSDs Get Cheaper

A. SSDs have been following a trend where they’re reducing in price. Soon they will be as cheap as Hard Disks given enough time.